Now there’s a funny sounding name, but this herb isn’t joking around. In fact, ginkgo biloba is the oldest surviving tree species on earth! Ginkgo biloba has a long history rooted in Traditional Chinese Medicine. If there’s one thing we’ve learned about traditional forms of medicine it’s that we can heal ourselves naturally!

It’s a herb that is often overlooked in modern medicine, but the truth is it has incredible healing properties. Traditionally, ginkgo biloba has been used to help oxygen and blood flow in the body, especially in elders.

However, this wonderful little herb won’t limit itself there. It’s recently proved to be essential in having sharp visual acuity. 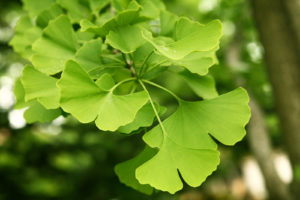 What Is Ginkgo Biloba?

The ginkgo biloba trees have a long history and long histories are sometimes hard to track, which is the case here. What we do know however is that a single tree can live up to 1000 years! That’s one heck of a lifespan.

The tree, which is thought to have originated from China, has over the centuries made its way all the way across the world. Today, the tree can be found planted right here in the US. It is mostly found in urban areas and parks. Next time you’re taking a stroll look for this tree.

As you can see from the image, it’s a quite large tree that can grow up to 120 feet. You don’t live to be the earth’s oldest tree by being frail, that’s for sure. The ginkgo biloba tree has a thick trunk with fanned leaves and fruit. However, the seeds within the fruit are toxic and cannot be ingested.

When we talk about ginkgo biloba, we’ll be referring to its hearty leaves, which are the source of most of the herbs healing and health properties. The fruit is rarely used; however the seeds have been used in Traditional Chinese Medicine as well as the leaves. In the US and Europe, we tend to use the dried leaves and extracts from those leaves.

Ginkgo biloba helps blood circulation in the body and is thought to improve memory and thinking. For this reason, it has become a popular treatment for those suffering from Alzheimer’s disease, which is a severe disease that causes loss of memory and independence.

It’s also an antioxidant that helps to fight free radicals in the body to protect cells from being damaged.

For Macular Degeneration and Diabetic Retinopathy

Besides being an excellent source of prevention and treatment for diseases like Alzheimer’s and several blood disorders, it is also excellent for your eyes1. Increasing blood circulation in the eyes has been linked to bettering the conditions of those with macular degeneration and diabetic retinopathy.

Both macular degeneration and diabetic retinopathy are conditions that affect the retina in the eye.

Diabetic retinopathy is cause by, you guessed it, diabetes. This vision condition causes damage to the blood vessels in the retina. Diabetic retinopathy often has little to no symptoms, while vision loss occurs in the severe and sometimes irreversible stages of the disease. It can affect anyone with diabetes and in some cases, pregnant women.

Because the ginkgo biloba herb regulates blood flow and pressure, it can effectively help your vision. By keeping blood flow constant and intraocular eye pressure low, the herb can both help with preventing macular degeneration as well as diabetic retinopathy and enhance your visual acuity.

This ancient tree has been used to heal people for centuries. The healing properties in ginkgo biloba are hard to deny, even by modern medicine standards. This tiny herb is sure to provide you with the best vision possible and prevent harmful diseases and vision conditions.

Where Can I Get Ginkgo Biloba?

Well, ginkgo biloba can be found in various places, mostly in herb and supplement form. In the US, it’s common to find ginkgo biloba extracts that either come in liquid pill form or in a liquid extract form.

The liquid extract form of ginkgo biloba is perfect for people who have trouble swallowing pills. Personally, I shiver at the very thought of having to swallow one. With the liquid extract, all you need to do is add some drops to your meals or drinks to get your recommended daily dose. Liquid extract is also the less expensive choice.

However, if you can manage to swallow pills, you may want to opt for the supplement pills. They’re the more expensive option, but depending on the amount of ginkgo biloba you need, they may last longer than the liquid extract.

Of course, the herb is also available as part of our Ocu-Plus Formula. Not only will you be getting the best parts of the herb, you’ll also be getting a whole world of healthy ingredients that will help keep your eyes healthy.

Finding out how much ginkgo biloba your body needs is dependent on several factors. First, you need to figure out what your goal is in taking this supplement? Is it to help with an existing disease? Is it to be used as a preventative measure? Talk to your doctor about finding the right daily dose of ginkgo biloba for you.

Can I Get Ginkgo Biloba from Foods?

Technically yes, but it is not recommended. As mentioned, the fruit that grows on the ginkgo biloba tree is inedible and the seeds are potentially fatal. Though the seeds are sometimes used in traditional Chinese and Japanese cuisine, studies have shown that ingesting more than 10 seeds in one day can lead to poisoning, seizures, difficulty breathing, and sometimes death.

That being said; don’t count on getting your ginkgo biloba intake from the tree’s fruit. You’re better off finding a good supplement that won’t hurt you. Supplements and extracts are made from the tree’s leaf, so there’s no chance of poisoning.

This ancient tree is an miracle worker. With leaves that have proven to help regulate intraocular eye pressure and blood flow, you can protect your eyes from permanent vision loss and increase your vision acuity!