Home > Food For Your Eyes > All About Bilberries and Bioflavonoids

Bilberries and Bioflavonoids are two of our 17 rockstar ingredients Ocu-Plus Formula. They come as a package deal that’s packed with antioxidants and can enhance night vision.

Bilberries are the magical fruit you’ve likely never heard of. That’s really a shame because this blueberry look alike could enhance your vision. Packed with bioflavonoids (if you don’t know what that is, don’t worry, we’ll talk about it) this berry is an important component in taking care of your eyes.

In fact, bilberries can enhance your vision so well that British pilots in World War II would help themselves to a hearty serving of bilberry jam before flying at night, hoping it would help their night vision. As it turns out, this wasn’t just some old wive’s tale passed down from their Mums and Grans; there’s more truth to it than you’d expect!

What Are Bilberries and Bioflavonoids? 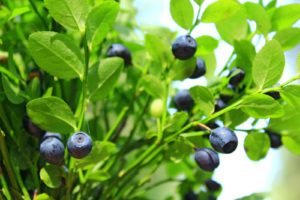 Bilberries are a fruit mostly found on the continental land mass of Europe and Asia, otherwise known as Eurasia. The blue (almost black) fruit grows on shrubs throughout the two continents. If you find yourself in the area, have a look around for the bilberry bush. And don’t worry, these berries won’t poison you.

There’s one more difference that is possibly the most important: the color of the pulp. Cut open a blueberry and you’ll find its skin misleading. Blueberry pulp is a clear greenish color. However, the insides of a bilberry are purple and red and often stain fingers and tongues when eaten raw.

The reason that the coloring on the inside of the bilberries is so important is because it means that these tiny berries are brimming with bioflavonoids. Bioflavonoids are what give the fruit its dark and delicious looking pigment. If you’re an avid reader of our blog, you’ll know that pigment probably means…

Antioxidants at it Again

On top of that, bilberries have proved themselves to be a worthy contender in the health world. The little fruit also helps with blood circulation, preventing clots and blood platelets from sticking together. In some cases, bilberries have also been used to help control diarrhea.

Bilberries and Bioflavonoids for Eye Health

Impressed yet? We sure are and we haven’t even told you the eye health benefits of the fruit yet. Bilberries are an essential ingredient in our Ocu-Plus Formula, an all-natural supplement that helps you get all the eye vitamins and nutrients you need.

So what exactly will you be getting with bilberries? It is said that bilberries actually enhance night vision! Not only that, but the bioflavonoids in the berry will improve your sight altogether. This Eurasian berry is the whole package.

Not only do bilberries help with seeing at night, but they also contain anti-inflammatory properties. Both of these properties are great news for those suffering from glaucoma. A notorious eye disease, glaucoma often causes patients to lose their night vision and experience intense intraocular eye pressure. Both these symptoms can be improved with bilberries.

As a blood regulator as well, bilberries are also great for people with retinal conditions or diseases. The retina contains tiny blood vessels that can sometimes leak (as seen with diabetic retinopathy) or clot. When this happens, it can mean severe permanent damage to your eyesight. You can prevent it by getting bilberries into your diet.

Where Are Bilberries Found?

Speaking of which…where are you expected to get these bilberries? As they are not native to the U.S, bilberries are hard to find in their raw natural form.

Though it is possible to grow bilberries on North American soil, growing them from seeds is extremely difficult. The seeds require cold stratification before they can begin to grow. This process, which happens naturally in nordic soil, is difficult to replicate. Besides, we have blueberries here, so why would we need bilberries?

Well, you can guess why. Bilberries are just a million times better! But fear not, there are other ways of obtaining these precious berries.

For one, if you find yourself in Nordic Europe, head to the market and grab yourself some. You won’t regret it, they’re delicious. But be wary, bilberries in Europe are often mistakenly called blueberries.

For the rest of us stuck at home, you can get your bilberry intake via bilberry extract. Bilberry extract sales have been on the rise in the U.S as more and more people are recognizing the health benefits associated with the fruit. Extracts are sold in both pill and liquid form! Of course, when you take our Ocu-Plus formula, you’re getting a healthy dose of bilberries and bioflavonoids along with 15 other vision-saving nutrients.

Bilberry is also available in jam form. If you’re a fine jam connoisseur, you’re going to want to add this one to your collection. You may not be able to find it in your local grocery stores, but you can check your local health food store. If all else fails, bilberry jam is available for purchase from a variety of online vendors.

Other Foods with Bioflavonoids

Berries aren’t for everyone. Sometimes I even find them a tad too tart. But that doesn’t mean you can’t get bioflavonoids from other excellent sources.

Some other foods include:

Before your brain starts overloading with information, know that the higher the pigmentation of a food, the more bioflavonoids it will most likely have.

Bilberries are the rich man’s blueberries. They are an essential ingredient in living a healthy life for your eyes and body. Though they may not be available in its natural form in the U.S., this shouldn’t stop you from taking advantage of all their health benefits!

Tags: all about ocu-plusantioxidantsOcu-Plus Formula