There’s a lot of emphasis on physical strength when it comes to athletic training, especially for hockey players. Hockey players need about as much strength as they can get, from muscular to cardiovascular strength. But what about goalies? They don’t move around nearly as much as the offensive and defensive lines, who spend significantly more time skating around and fighting. Funnily enough, vision training for NHL goalies is one of the most important regimens.

Goalies need a whole different training strategy than most players. A large part of their job on the ice is to spot and follow the puck like a hawk locking in on its prey. That kind of visual precision doesn’t come from doing squats or 30 minutes on the treadmill. It comes from very specific eye training and exercises. 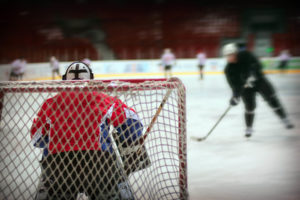 The NHL luckily seems to be more than aware of the importance of this vision training in sports. NHL goalie superstars like Braden Holtby, James Reimer, and Johnathan Bernier are a few goalies that have taken to prepping their eyes for the big game, with several other goalies following suit.

All players need to be focused, but when your sole focus is on a small black puck, it can easily be lost in a goalie’s field of vision. The only way to get better focus and quick perception are through visual training. With a quick eye comes a quick hand, and a quick save!

The first step for many NHL goalies is to get their eyes tested. But their eyes are not tested in the same ways yours or mine are; eye doctors for athletes look for very specific movements and conditions in goalies’ eyes. This will then make it easier to find the right training for each goalie.

There are four factors that doctors look out for when testing goalies’ eyes:

All four visual tests require both eyes to work in tandem to complete accurately. If not done accurately, this most likely means the eyes are not performing at their best.

Josh Tucker tested one European goalie at Envision Sports in Minnesota, who immediately noticed something off in the goalie’s vision immediately after starting the movement pattern test. Whenever the goalie would look to his low right, his eyes would jump. As a result, his eyes would skip over a whole part of the range of motion.

As eye deficiencies are different across different goalies, there is no one size fits all eye training program. Each program is tailored to the goalie’s specific needs, which will help target their deficiencies for a speedy correction. Training programs like this are becoming increasingly popular amongst goalies at the college and professional levels.

Part of Braden Holtby’s pregame warm-up is to warm up his eyes using a tennis ball to recreate the tracking (of the puck) he does on the ice. Juggling is one of his exercises of choice. Watching the ball without moving your head as it travels up and down is a good way to work on tracking.

Vision training has proved to have such an impact on goalies that coaches have started adding vision training into their off-season training as well. Goalies are the eyes of the team, and without them, there would be no game.

Vision training isn’t exclusively for pro athletes to use. Whether you’re an up-and-comer or have a little one just starting in little league hockey; it’s never too early to start training.

Strength and conditioning coach Maria Mountain specializes in off-ice goalie training. She emphasizes the importance of not only having good hand-eye coordination as a goalie but the ability to recognize and respond to patterns.

One eye exercise Mountain shares to improve pattern recognition is called “Juggling to Knee Down.” This exercise consists of juggling two tennis balls with one hand, as you lower yourself onto one knee, stand up, and then back down onto the other knee. This is repeated for five minutes (more than five minutes is not recommended). If you’re interested in having a visual, check out her video.

This is by no means an easy feat. Juggling is hard enough with two hands, let alone one, and then add the knee drop? You’ll need a lot of patience for this one. Notice in the video how Mountain’s head stays relatively leveled as her eyes follow the ball. In doing this, she is letting her eyes get a workout, as well as her body. Her eyes (not her head) work on tracking the ball.

Goalie eye training doesn’t always have to have a physical component to it either. Holtby has said that he sometimes will sit in the empty arena before the game and dart his eye across the ice. In doing so, it helps with the speed and clearness with which he perceives objects. This will no doubt help spot the puck in a fast-moving hockey match.

As much as vision training plays an important role in goalie training, diet also plays a huge role in eye health. Vitamin A is known as a super nutrient for your eyes. It is essential to your eye health and can be found in some very common foods like carrots, spinach, cantaloupe, and sweet potatoes! Who knew keeping your eyes healthy could be so deliciously rewarding?

Whether you’re a professional goalie or just starting out playing in your homemade ice rink, it’s always a good idea to start getting the most out of your eyes. Eyes are complex and need quite a bit of encouragement if they’re to perform to the best of their abilities.

Goalies’ eyes don’t work for them, they work together with their eyes. Taking care of their eyes and training them is just as important as hitting the gym and running drills on the ice. Eye health plays an important role both on and off the ice; reward them for their hard work by eating right and strengthening them.