Let’s talk about vitamin A.

Vitamin A enjoys a good, but a rather vague reputation – most people are aware that they should probably make sure to eat enough of it, but an awful lot of them aren’t entirely sure why.

And in most cases, this is enough. Vitamin A is indeed good for you in almost any scenario and we definitely encourage getting your daily fill.

Still, that’s not what anyone would call a curiosity-satisfying definition, so let’s get into a little more depth on what vitamin A is, the role it plays in your body and how to make sure your own intake is making the grade.

The Vitamin A Family 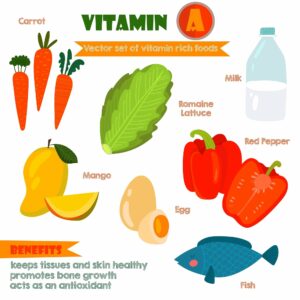 First, the vitamin suffers from a bit of an identity problem. “Vitamin A” generally does refer to a single chemical: retinol, which is abundant, available through food, and the form in which the vitamin is stored inside the body. However, several other compounds are also considered part of a wider vitamin A category.

These come in a few different forms, which can be created from another form being mixed, matched, or split apart. For example, retinol, one of the primary forms of vitamin A in the body, can be transformed into retinoic acid. Both serve crucial, but very different biological roles and both are considered members of the vitamin A family.

Consequently, you’ll probably see vitamin A listed under quite a few different names when browsing foods or supplements. Retinol, retinyl palmitate, alpha-carotene – they’re all different words for what winds up being functionally the same thing.

If you stick to natural sources, you’re most likely to encounter just two basic forms. Retinol will appear in the nutritional facts for foods with animal sources, while vegetables generally contain several types of carotenoids – which are actually precursor molecules that the body then assembles into retinol.

Once it makes its way into the human body, vitamin A does a few pretty important things.

The first – and the one you’ll hear most about here – is that it ensures that our eyes remain healthy. Vitamin A is a nutritional cornerstone of both color and night vision. Without it, we’d be missing half of the ingredients needed to create rhodopsin.

And what is rhodopsin? Rhodopsin is an extraordinarily handy protein that changes when exposed to light. When this change takes place in our eyes, it allows us to perceive light. Rhodopsin is absolutely indispensable for low-light vision and also plays an important role in color vision.

Without it, our eyes wouldn’t be good for much. It’s for this reason that one of the classic early warning signs of Vitamin A deficiency is night blindness caused by insufficient production of rhodopsin.

Outside of the eyes, vitamin A seems to be a key nutrient for maintaining healthy skin. Like retinoic acid, it works to regulate skin cells. Researchers don’t understand the exact mechanisms at this point, but retinoic acid certainly has some effect on the skin; one form of it is marketed as Accutane, an enormously effective, but also a somewhat damaging treatment for acne.

Vitamin A deficiency is both dangerous and incredibly widespread. Lack of nutritious food can quickly cause enormous problems; in fact, a deficiency is considered by UNICEF to be a primary preventable cause of childhood blindness and death around the world.

Deficiency tends to be particularly hard on the eyes. Night blindness is an early problem, but unaddressed, a chronic deficiency will eventually result in the complete destruction of the cornea, causing total blindness.

Besides this, a lack of vitamin A can also impair a person’s immune system and even have detrimental effects on their teeth.

But if that has you hunting for a bottle of vitamin A supplements, you may want to reconsider…

Too Much of a Good Thing

As is often the case when we’re talking vitamins, it’s possible to overdose on vitamin A.

The potential for an overdose is largely due to this nutrient being fat-soluble. It’s a big molecule and readily sticks around in the human body longer than other water-soluble chemicals. Consistent over-supplementation can stack up and eventually cause an excess.

And when that happens, it can be every bit as bad as a deficiency. A vitamin A overdose will have you nauseous, losing your hair, and possibly even your mind, thanks to the altered mental states that the condition often causes.

And that’s really the tip of the iceberg. Extremely chronically high doses can result in serious liver damage and, in pregnant women, eventual birth defects.

In fact, unless you have a very specific medical reason to take large vitamin A supplements, it’s probably best to exercise some serious restraint.

The good news is that most readers should find it relatively simple to get all the vitamin A they need naturally through diet. Supplements may come in handy for some, but for the average individual, a balanced diet is about all the supply they’ll ever need.

An enormous range of veggies contain precursors to vitamin A. Leafy greens tend to be a safe source for just about any nutrient we can name and vitamin A is no different. Turn to kale and spinach for a healthy dietary fix.

Root veggies, like carrots and sweet potatoes, are also excellent places to stock up on vitamin A. Broccoli, pumpkin, and even some fruit – such as mango – will also keep you in good stead. A good rule of thumb for fruits is if it’s orange, it’s likely a source. Apricots are another well-known option.

Dairy and eggs are also lovely ways to make sure you’re getting enough vitamin A. Cheese, in particular, is a well-known source, but eggs and milk are also excellent.

If you’re feeling more carnivorous, options get a little more limited and for most of us, a little less appetizing. Your two main choices are cod liver oil and well, liver. The big organ’s not always easy on the palate, but it is an incredible natural repository of our favorite vision vitamin.