Playing video games is a favorite pastime for teens and adults alike. Whether it’s taking down the opposing team through fighting games like Call of Duty or racing your friends in Mario Kart, video games seemingly offer something for every interest. However, most parents and teachers push young people away from playing video games as much as possible. But why? Did you know that video games can actually benefit your vision?

Visual acuity is the ability to see details, sharpness, and letters or numbers at a distance. Eye doctors often have patients do the Visual Acuity Test. They must read a board of numbers and letters from a distance until they can no longer see them. As we age, it’s normal that our ability to see details from a distance diminishes. Video games can actually help improve visual acuity because they challenge the eye muscles to move and focus quickly. As a result, someone who plays video games’ results on the Visual Acuity Test can actually be better than those who didn’t play video games at all.

First-person shooter video games are often set in life-like arenas. Some are in cities, the wilderness, or post-apocalyptic worlds. Video game designers jump through hoop after hoop making the backgrounds of these games appear life-like. The player may only be focusing on where they’re shooting, but their brain is taking in the whole screen, including the background. By having random objects in the background move naturally (wind through trees, civilians walking down the street, etc.), the player must use their peripheral vision. This is incredibly beneficial for real-life activities like driving, walking in a straight line, and being aware of your surroundings at night. Your peripheral vision is important, so it’s okay to train it by playing video games.

It had always been assumed that the ability to discern different shades of grey was fixed, therefore it couldn’t be improved. Having a low visual sensitivity to contrast in colors is dangerous. It means driving at night is a scary feat, especially when there’s fog or smoke. Recently, though, studies have found that you can improve grayscale vision through playing video games. Certain games are able to retrain your brain to beat low-vision and improve greyscale clarity. Up until this point, people with contrast sensitivity would strongly consider surgery or corrective lenses to fix it. Video game developers are currently working on video games targeting low-vision players to even further improve their vision.

If you’ve never played a first-person shooter game, you should know that it can cause a roller coaster of emotions. A brain scan would show dramatic spikes in adrenaline dozens of times in one hour of play. Bavelier and her team argue that these spikes in adrenaline are causing sporadic releases of dopamine from the brain. Dopamine is known as the “happy hormone”; it elevates your mood. By triggering the brain to release dopamine from visual triggers, the players are rewiring the connectors in their brain. And, new connectors from the brain to optic nerve are created. This means that the brain can interpret more visual cues than before, thus improving vision.

A recent study found that playing video games can actually help children improve their amblyopia. Amblyopia, also known as “lazy eye,” occurs when you have weak eye muscles in one or both eyes. The affected eye doesn’t have the same mobility or strength as the other. Through playing these games with a patch on, the players experienced a 30 percent improvement in visual acuity after 20 two-hour sessions. Another group of participants with amblyopia wore an eye patch but did not play a video game for the same length of time. They noticed significantly less, if any, results.

Like any good habit, the benefits of playing video games when it comes to your vision only increase as you do them more often. So, playing routinely can actually train your eyes to improve in the previous five areas for a long period of time. While the results will likely be more pronounced in children’s eyes, which are more malleable, even playing into your thirties and forties can help strengthen your vision for later in life. Of course, you don’t want to go overboard and give yourself a case of digital eye strain, but don’t cut out all video games from your lifestyle just yet.

Are All Video Games Good for Vision? 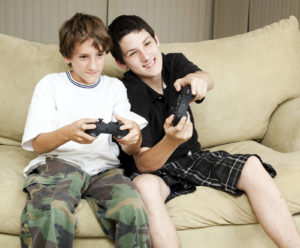 Most of the previous benefits we mentioned come from playing high-intensity action video games. So, games like Animal Crossing, The Sims, and Pokemon Go are not likely to produce the same results.  However, the amblyopia study reported that playing both action and non-action games improved the amblyopia for their participants. So, it would seem that you need to understand what your vision issues are before attempting to treat them with video games. Scientists and game developers are working on creating games that improve vision without being violent.

Should Kids Be Playing Video Games to Improve Vision?

There’s discussion over whether video game therapy is suitable for children with low vision. Kids today are often playing video games at home and with their friends. But, child-friendly games aren’t usually first-person shooting games like the ones that produce these results. It’s clearly not recommended for children to play violent and aggressive action games. Until game developers and scientists come up with a game that provides the same results without violence, children shouldn’t be using this type of therapy for vision issues. Contrarily, children who suffer from amblyopia can improve their eye muscles with non-violent games. In these cases, parents should speak to their child’s eye doctor.

The breakthroughs in recent research have changed the way we see video games. Players were once viewed as lazy and unintelligent. Now, it’s possible they have high brain-functioning and even superior vision. The future is bright for video game therapy, especially in addressing vision impairments.