We spend an awful lot of time on this site talking about what happens to aging eyes. As older folks, to put it nicely, that’s something we can either sympathize with or worry about. However, for many people, the degenerating vision that comes along with age (presbyopia) isn’t really a looming issue. Or well, it might be, but most are probably going to have to at least hit puberty first. Childhood eye disorders aren’t a concern once you’re an adult.

Yep, we’re talking about the younguns.

Childhood is a strange and magical time for the human body, marked by extremely rapid change. Unfortunately, that torrid rate of growth applies to our disorders as well. Even things that seem like very minor problems for a child can develop into permanent, life-changing issues. Proper eye care for your children is an absolute must, but don’t leave everything to your doctors. After all, they don’t spend even a fraction of the time with your child that you do. Parents are on the very front lines of the fight against childhood eye disorders.

Read on, and we’ll discuss two of the more common speed bumps your own little human can encounter. 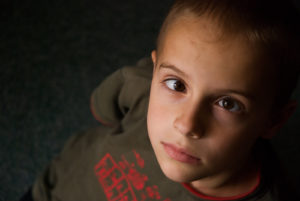 You’ve probably heard of strabismus in children under a slightly different name: crossed eyes. While it may sound fairly innocent, leaving the condition untreated can open a truly nasty can of worms later in a child’s life.

Out of all the childhood eye disorders that we’ll discuss here, strabismus is among the earliest to present. It’s caused by a lack of coordination of the muscles that control eye movement. Many infants are actually born with some form of misalignment, and most outgrow it relatively quickly. However, up to three percent of children still grapple with the disorder into later childhood.

One of the most common forms seen in younger patients is something known as accommodative esotropia. Broken down, it simply refers to the turning inward of one or both eyes. Farsighted folks are at greater risk as, to focus on nearby objects, they’ll sometimes actually turn their eyes inwards. This is to combat their naturally distant-focused vision. Think of it as an extreme version of what happens whenever you hold a finger in front of your face and slowly draw it closer to your eyes.

Strabismus in children, once caught, is relatively easy to treat with appropriate vision therapy and use of corrective lenses. However, if it’s not caught, you risk your child developing a different childhood eye disorder. Chief among them is amblyopia.

If the misalignment that causes strabismus goes uncorrected, amblyopia is often the next stage. Often called lazy eye, amblyopia in children stems from a coping mechanism the brain uses to make up for strabismus. A child with strabismus has essentially non-cooperative eyes and won’t receive the benefits of binocular vision that children with healthy sight do.

However, humans are durable critters, and when one part of the body encounters difficulties, the brain often works around it. The solution in this case: ignore a large amount of the information coming from one eye. Input from the child’s dominant eye becomes more highly prioritized. The result is that vision stops developing normally in the weaker eye. Eventually, amblyopia develops.

Up to three percent of the population has been estimated to suffer from amblyopia, with varying degrees of severity. Amblyopes with less extreme symptoms often don’t realize that they’ve ever had the disorder until later tests finally detect it. This is especially true of amblyopia in children because they don’t know any different.

People living with amblyopia have become accustomed to using monocular cues for things like depth perception and movement detection. Profound cases, however, can be more problematic. The compensations that might make up for a milder case don’t quite cut it anymore. Depth perception, spatial acuity, and sensitivity to motion cues all suffer. Some amblyopes will even experience spatial distortion and similar vision problems.

If caught relatively early, amblyopia in children has a decent prognosis. Patching the dominant eye of an amblyopic child forces them to use their less dominant eye, hopefully restoring more balanced sight. Applying atropine to the less-developed eye has also worked well. Treatment isn’t so easy in older children and adults. Still, the picture isn’t entirely bleak. Several vision therapies have been shown to provide at least temporary improvement, and researchers are still looking into ways to tackle the issue.

What Can You Do?

If you’re a parent, then there are a few things you should know about children’s eyesight and signs you can look out for. Catching strabismus and amblyopia early can be difficult. This is why eye exams are so important for children. Toddlers aren’t necessarily going to pull you aside and have a heart-to-heart about their concerns regarding their vision. Their own eyes are the only thing they know, so it isn’t surprising that as far as they’re concerned, whatever they’re experiencing is normal. Instead, you’ll have to play your part to look for obvious behavioral signs of childhood eye disorders.

An awful lot of the signs are what you’d expect. Obvious trouble with spatial cues is a big one. If you notice a child consistently bumping into objects or clearly misjudging distance, that should raise some flags. Misalignment can also cause some balance troubles, so if you see a toddler stand up, only to weave and topple back over, it’s worth watching. Of course, both of these signs are complicated by the fact that young children, no matter how healthy, spend an awful lot of time falling over of their own accord. However, if your own kid seems to run into trouble more often than his or her peers, you may want to bring them in for a checkup.

Other cues include apparent frequent eye rubbing, or difficulties with one eye over another. Squinting can be a sign of trouble, along with closing or covering one eye when visually concentrating. And sometimes, strabismus isn’t all that tough to catch. If your child is obviously cross-eyed, or has a wandering eye, then it’s time to bring them in for a checkup. Amblyopia and strabismus in children aren’t uncommon. It’s your job as the parent to look for signs and take your kids in for an eye exam.