It can be hard for visually impaired people to retain their independence when their vision problems make it unsafe for them to drive. They must rely on family, friends, and neighbors to take them wherever they need to go. That can be a huge inconvenience to both the visually impaired person and the people who have to drive them around. If you have a family member or friend who has experienced visual impairment, you are very familiar with this issue. 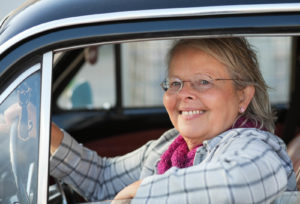 The good news is that for people with vision impairments that are bad enough to prevent them from driving even with corrective lenses, there is a small piece of technology called bioptic telescopes that can give them their independence back and allow them to drive. Some people have a condition called hemianopia, which is partial blindness in the vision field. Researchers are conducting studies  with driving simulators that may result in allowing them to drive again in the future.

As you well know, there are many eyesight issues that make things like driving difficult. As people age, there is more and more to worry about; even seeing in color! However, new technology makes things easier for the visually impaired every day.Who knows, with new technological advancements coming out every day, just about everyone may be able to safely operate a vehicle one day!

Bioptic telescopes are special eyeglasses that have small telescopes mounted on them toward the top of the lenses. They enlarge images a lot like the way binoculars do. However, their function isn’t necessarily to make things larger for the visually impaired. Rather, it allows them to see from further away.

What makes driving so unsafe for these visually impaired people is the fact that they have to get extremely close to a sign or traffic signal before they can see it, which leaves them almost no time to react and slow down or make a turn. Bioptic telescopes allow them to see the signs and traffic signals much sooner. This gives them plenty of time to react. If you think back to driver’s ed, you’ll remember that a lot of driving safety depends on quick reaction time.

Bioptic telescopes necessitate an adjustment period. So, the visually impaired using them must go through training to be able to use them properly. They start off using the telescopes while walking around. They then wear them while riding as a passenger to help acclimate their eyes to the tools. Once they have gotten used to using them that way, they are then able to start driving with them. Imagine the freedom that comes with being able to drive again!

This invention has given many people with vision impairments the ability to become independent again. Unfortunately, they come with a price tag of about $2,000 at the lower price point. Because of this price point, there are a lot of visually impaired who could benefit from them but can’t  afford to spend that amount of money out of pocket. Most insurance companies don’t offer coverage for these devices yet, either.

People diagnosed with hemianopia have gone blind in half of their visual field in one or both of their eyes. Various trauma, tumors, or strokes cause this debilitating issue. One of the worst parts about hemianopia is that it leaves these individuals unable to drive.

The Problem With Intersections

People with hemianopia need to compensate the most when they approach intersections.  They have to turn their heads away from their vision loss side to detect other cars. People with normal vision can detect these obstacles while looking straight ahead. If the driver with hemianopia doesn’t turn their head enough to see the entire intersection, they pose a huge safety risk. This would affect both the visually impaired driver as well as to other people on the road.

The researchers hope that if people with hemianopia receive training to teach them how to properly compensate for their loss of field vision while driving, they may be able to safely drive eventually.

While natural vitamin supplements will not help people with hemianopia restore their vision, some people with common vision problems might be able to improve their eyesight through the use of eye vitamins like our Ocu-Plus Formula. If your vision is poor due to common vision problems like nearsightedness, farsightedness, presbyopia, or astigmatism, eye vitamins can actually strengthen your eyes and help prevent eye diseases.

Many people who have had to wear corrective lenses their whole lives have actually improved their vision so much with eye vitamins that they no longer need corrective lenses to see clearly. That is a huge step in the fight against vision loss, as is the latest technology mentioned here. So, even if you can’t afford fancy telescopes or don’t want to undergo risky procedures like LASIK, you can still work on strengthening your eyes naturally and safely.