Home > Eye Doctors > The Difference Between Regular and Behavioral Optometry

If you haven’t really heard of behavioral optometry before, you’re not alone. Like vision science, the term isn’t an incredibly commonly-used one and it can be difficult to turf up information on the practice, let alone find a practitioner.

And, as with chiropractic care, behavioral optometrists have their pros and cons. While they often practice thoroughly disproved branches of medicine, they’ve also adopted some that do have known therapeutic value – eye exercise among them. Keep reading to learn about this interesting – and controversial – branch of optometry.

What Do Behavioral Optometrists Do?

Behavioral optometrists seek to treat a number of different disorders – visual and otherwise – through the use of natural vision therapy. You won’t find any pharmaceuticals, med school degrees (though they do generally have at least a couple years of post-grad education), or even contact lenses at a behavioral optometrist’s office, but you will find a wealth of information on eye exercises and maybe a few prisms to boot.

As mentioned above, behavioral optometrists have some beneficial practices and a few completely unproven ones. We personally support the use of eye exercises to treat some disorders, as well as their emphasis on sports vision training.

One area that you should view with a wary eye is behavioral optometrists’ focus on underperforming children. A fierce debate has raged for the past several years on whether or not visual problems play into dyslexia and similar reading disorders, but evidence seems to be stacking up against behavioral optometrists.

More recent studies have found that problems associated with dyslexia don’t have much to do with vision at all. While there was pushback from alternative practitioners, there’s less and less room for doubt on the subject: a behavioral optometrist probably can’t help you if you’re trying to treat your child’s dyslexia.

However, despite this caveat, behavioral optometrists do have some strong points. Most do have an understanding of different eye disorders and can conduct a full vision screenings. Moreover, their methods, eye exercises in particular, have shown some efficacy in treating convergence disorders and amblyopia (patching eyes is an antiquated, but acknowledged treatment). They’re also much less likely to turn to pharmaceutical treatment or surgery than other health professionals.

One final thing to point out – it’s best to very thoroughly research any behavioral optometrist you’re thinking of working with. School quality varies wildly and no single governing body certifies practitioners. The closest thing to a guarantee of quality you’ll find is a College of Optometrists in Vision Development certification. This nonprofit counts both eye doctors and vision trainers among its ranks. They do vet members for quality before listing them.

How They Differ from Traditional Optometrists 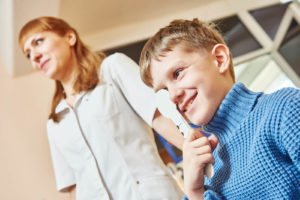 Despite their similar names, there’s very little in common between behavioral optometrists and regular optometrists. Both are healthcare professionals, but aren’t what you’d consider med-school-trained doctors (although optometrists can and do carry the title “doctor”). However, optometrists work well within the boundaries of western medicine. Who knew that optometry was such a diverse field?

You’ll most often find optometrists as adjuncts to ophthalmologists, or as independent practitioners. Either way, their primary duty is to fit and prescribe corrective lenses for individuals with low vision or vision disorders. In order to do this they make use of tools including phoropters – the strange, multi-lensed devices you’ve probably used during any fitting for glasses – microscopes, and other specialized opthalmic equipment.

Unlike behavioral optometrists, traditional optometrists in most countries do have a set education platform. They also graduate with a standardized degree – OD in the US and Canada. Moreover, state boards regulate them and doctors must pass tests to remain certified.

In recent years, optometrists have evolved to become primary eye care physicians. Besides prescribing lenses, many now diagnose and treat basic eye diseases and disorders and can even prescribe pharmaceutical treatment and conduct some surgeries. However, their ability to carry out these procedures varies from state to state. So, an optometrist in Arkansas isn’t quite the same as one in California.

Which Should You Choose?

If you’re concerned about your child’s sight, you may want to head to a behavioral optometrist for a vision screening. However, you will likely want to find a secondary physician capable of providing corrective lenses.

Eye exercises are useful and can help improve visual acuity, but they’re best seen as a way to wean someone off of glasses or contacts, instead of replacing them. For children, this isn’t time easily afforded. So, it’s best to make immediate fixes before switching your reliance to natural methods.

However, if you’re interested in improving your own vision and aren’t interested in invasive or drug treatment, a behavioral optometrist could be a good fit. Granted, if you have an actual eye disease, such as an infection, you’re better off heading for an optometrist, or an emergency room.

How to Find a Practitioner

Finding a behavioral optometrist can take some time and effort. Do some research on each individual aspect of behavioral methodology – each practitioner will likely have a few different specialties, so ensure that these align with what you believe could be effective.

For example, if you’re interested in eye exercises for improved visual acuity, you may want to look for someone with a background in sports vision therapy. If you’re just concerned with staving off presbyopia, search for a professional used to working with aging eyes.

We would highly recommend searching through the COVD link provided above. The organization’s testing procedures at least ensure that you’ll find someone capable of safely giving high-quality care.

As for traditional optometrists? That’s easier. Your local insurance network should have a decent selection of practitioners. After that, it’s a simple matter of finding one that you like and arranging a visit. Optometry can be confusing, but with the right professionals in your corner, your vision will be better than ever.