Every year, several more-or-less reputable societies get together and select a word of the year. The nominees are usually more trendy than anything else, and reading through a list of them is a little like picking the most viral (and sometimes most annoying) elements out of each year, with winners including “truthiness”, “unfriend”, and “woot”. The big winner back in 2013? Selfie. But what does all of this have to do with getting your kids to have healthier eyes?

And for good reason. The past decade has seen the rise of smartphone culture in the U.S. Eighty-four percent of Americans now own smartphones, to say nothing of the number that have computers and televisions as well. All those devices stack up to some serious screen time, and while that might be less than healthy for adults, it can be much worse for children. Children and teens are officially recommended to have only around two hours of screen time per day, a number that only around 20 percent actually follow. No wonder we start to notice vision problems in children when school starts! 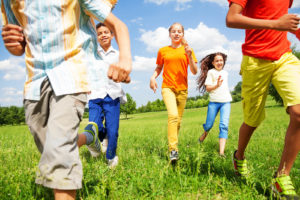 The solution? As everyone’s parents always said: “Go play outside.” Getting outdoors and away from screens is a great way to keep kids healthier. Vision in particular can benefit from some more fresh air. Follow along, and we’ll get into a few of the reasons why your kids’ eye health might be in sore need of a bit of nature.

Myopia, or nearsightedness, is on the rise. While it’s never been rare, American rates have soared over the past decade and show few signs of stopping. The trend is most pronounced in younger people. It tends to be more prevalent in children ages 5-19.

Myopia is relatively easy to handle with corrective lenses – or surgery – but it still poses a potentially serious risk to affected kids. The fuzzy distant vision that characterizes nearsightedness can make reading the board a daunting, headache-inducing experience in school, and can impact a student’s education. Besides that, myopia can also be a contributing factor to later-life, more serious diseases such as glaucoma.

The causes of myopia are still somewhat obscure, though most researchers point to a combination of factors. Some of these include genetics and reading habits. Some have also posited that spending too much time indoors might play a role. Studies over the last 10 years have shown that enforced outdoor recess periods can reduce the incidence of myopia.

The secret may lie in light. Higher access to daytime outdoor periods proved to be more beneficial to students’ eyes. While the reasons aren’t perfectly understood, it does at least seem clear that curtailing time spent watching movies in the house might considerably boost a child’s chances of avoiding myopia.

Think back to the last time you saw a group of teenagers in public. There’s an excellent chance that you’re currently remembering a silent row of heads, all bent over smartphones. It’s a common enough image to have become a running millennial joke, but there’s a serious problem behind the screen time. Too much time spent shut in with a digital device can damage our eyes mechanically. As it turns out, it can even affect the way we process images that we perceive.

Luckily, spending time outdoors (especially as young children) can seriously reduce the risk of developing myopia. A recent study found that time spent outdoors between the ages of three and nine greatly reduced the incidence of myopia once the children were in the 10-15 age range.

This study was conducted by surveying pregnant mothers in the early 90s and following them and their children as they grew up. The mothers self-reported how much time their children spent outdoors after the age of three. The results conclusively showed that children who spend more time outside as they grow up are at a lower risk of developing myopia than teens.

While worries that overuse of digital devices can erode social skills are nothing new, it’s still surprising to see how quickly they can change our ability to interact with other people. Booting kids outdoors, while important, might not always be enough. The new boom in smartphone use means that parents will have to take steps to limit screen time away from the house as well – think about helping your child find areas of interest that limit smartphone use. Athletic or outdoor clubs are both great options.

While we usually leave parenting advice to other blogs, we do have some advice on making sure that children don’t encounter the full effects of excess screen time. First, know your limits – the government recommended maximum screen time for most children is two hours per day. Below the age of two, the daily recommended time is zero. Yes, that even goes for educational T.V. shows.

Take special care to discourage smartphone use before bed for your children. The blue light that the screens emit can wreak havoc on normal sleep cycles. This will leave your kids groggy and short on rest.

Beyond that, do everything you can to encourage an active, adventurous life at home. School, once a sure place for a child to interact and explore, isn’t quite what it used to be. Recess has been slashed in many schools, removing some of the outdoor time a student would usually have. Classrooms are also increasingly turning to smartphones and tablets as learning aids. While effective, this practice also means that kids get even more screen time at school. As a result, more of an onus is now on parents to promote healthy practices.

To counteract this, when children get home from school, send them out back to run around for at least 30 minutes. If the weather won’t permit it, encourage other, non-screen related activities before kids start their homework. Have them fix their own snack or play a quick board game. This will help give your child’s eyes the rest they need before returning to the computer for homework. It will also help prevent digital eye strain.

Start with yourself – adopt eye-healthy practices, like taking daily vitamins and putting the computer down when your child comes home from school. Look for hobbies that you can do with your kids that get them away from screens. While settling in to watch a football game is fun, actually playing a short round of pass will pay greater dividends in keeping your child’s vision healthy.