The world cannot seem to get enough of 3D technology. Sure, the physical world around us is 3D. Yet it is somehow more impressive when a movie or video game can recreate that life in three-dimensionality.

But, as fun and realistic as 3D makes movies and games, this technology may be harming your children’s eyesight. To say that children have delicate eyes is an understatement. Though little research exists yet, health organizations around the world fear that 3D technology may be affecting the development of young eyes.

3D technology is constantly evolving to take new forms and become more accessible to everyone. But, it’s also something that is definitely concerning when it comes to your child’s eyesight. 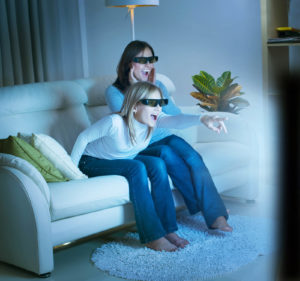 What Is 3D Technology?

Long gone are the days of wearing flimsy, paper glasses with one blue lens and one red lens to watch a 3D movie. You walk into a 3D movie these days wearing sleek, almost sunglass-like glasses (but please don’t wear them as sunglasses).

The earliest confirmed 3D movie was released in 1922! After that, 3D technology came and went. It hit a golden era in the 1950s. Then, it lost popularity and gained popularity until about 2009 when the blockbuster, Avatar, was released. This movie relaunched 3D movies. Before you knew it, everything was in 3D.

We’re now living in a new golden era of 3D movies. Naturally, there are those who are using this technology for gaming and at-home use (ex. virtual reality gaming and 3D televisions).

Yes, 3D media can be fun (as long as you aren’t one of the few who get motion sickness from it). But, is it a safe technology to be exposing our children to?

We’ve covered the topic of children’s eye development in the past and if you’ve read our articles, you’ll know that it is a complex and slow process. Without good eyesight, your child may face many obstacles, including difficulty learning and being excluded from sports and other activities.

When babies are born, the size of the eye is almost fully formed. Eyes grow very minimally and reach their adult form at around the age of 13. However, that doesn’t mean that the eyes come fully developed.

Throughout infancy all the way to your child’s 18th birthday, their eyes will continue developing. These formative years are incredibly important as even the slightest eye developmental issue can cause a lifetime of bad vision.

In fact, some vision conditions, such as amblyopia (lazy eye), are easily corrected during childhood, but relatively incurable in adulthood.

The main concern among health organizations, such as France’s ANSES, is that prolonged and excessive exposure to 3D technology will lead to developmental issues in the eye.

We’ve all been told not to sit too close to the television for fear of developing various vision problems. Now, parents all around the world need to be urging their kids to lay off the 3D games and movies.

3D technology is not new, but what is new is the accessibility of it for children. Because it is a rather recent phenomenon, little research exists to support the claim that 3D technology is hindering eye development in children.

However, the few ophthalmologist experts who have spoken on the issue claim that 3D technology won’t damage your child’s eyes if used wisely. But, just like any screen your child uses, if used unwisely, no one knows the ending to that story just yet.

Though the exact impact on our children’s eyesight from long-term use of 3D technology is unknown, we do know of some short-term effects to look out for. Luckily, many of these symptoms are similar to digital eye strain symptoms. These symptoms are nothing to worry too much about because they are easily treated.

If your children use a lot of 3D technology, be sure to keep an eye out for these symptoms:

Eye strain is a common symptom of excessive screen use. But, 3D technology causes more eye strain in a shorter amount of time. This is because 3D glasses force the eyes to focus in ways that they aren’t used to. As a result, the eyes become fatigued quicker.

Eye strain inevitably leads to headaches because the brain has trouble focusing well. When the eyes become tired from focusing, so does the brain. Ask your child if they get headaches while watching 3D movies or playing 3D games to make sure they aren’t going overboard.

Blurred vision is also a symptom of eye strain. We’ve all had long days of staring at a computer only to look away and find that everything is blurred. Children are not exempt from this, especially if they’re using 3D technology.

This visual concern is very easily solved. Limit and monitor your child’s intake of 3D technology. There’s no reason to ban 3D technology from children, not to mention that it’s an unrealistic goal.

If you teach them how to use this fun and exciting technology responsibly, you’ll provide them with good screen use habits for the rest of their lives. Here are some tips:

3D technology has pushed entertainment to a whole new level. There’s no reason to toss this technology out the window, nor would we want to. It’s too much fun!

Take care of your children’s eyes by limiting their exposure to 3D technology and teaching how the technology can affect their eye health. As always, making sure your child gets the proper nutrition and visits the eye doctor regularly will do wonders for their visual health, both now and in the future.