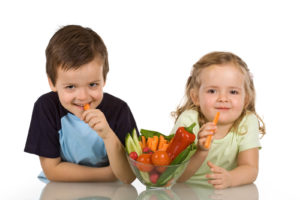 A balanced diet, containing all the required nutrients, can improve the quality of life for people of all ages. But proper nutrition is never more important than during childhood. The foundation of all the systems used throughout life is formed during those early years. Being deficient in one of these nutritional building blocks can have catastrophic consequences later in life. So, what do you need to know about children’s nutrition?

There is absolutely no substitute for the quality of life enhancements that come with healthy vision. We’re going to discuss the nutrients required for that strong foundation.

Age-related macular degeneration, or AMD, is a condition that causes the general failure of vision over time. And, it’s one that research shows can be significantly affected by proper nutrition. This is especially true for those who eat a Mediterranean diet. Recent research has proven the importance of the nutrients found in the diets of Mediterranean people. By copying these diets, we can also prevent AMD.

AMD is the leading cause of blindness in the elderly. But, with a solid foundation of healthy eating starting at a very young age, you can avoid it. The condition can be greatly delayed or even reversed as the years go by.

We’ll be discussing several different nutrients that should be present in a balanced diet, especially during childhood. As well, we’ll discuss which foods these nutrients are commonly found in.

How to Boost Your Children’s Nutrition

Lutein is an antioxidant, and one of two carotenoids found in high quantities in the eye. The other carotenoid is zeaxanthin and they are both often found together in foods. The antioxidant properties of both zeaxanthin and lutein help to prevent oxidation of the lens of the eye. Oxidation is one of the major causes of cataracts. Researchers have estimated that a large proportion of the world doesn’t get the lutein they require.

Lutein is found in kale, spinach, and other leafy greens, along with its sister carotenoid, zeaxanthin. While there isn’t an exact daily recommended intake of lutein, research has shown benefits after 10mg daily. While not the most popular foods with kids, you can add these leafy greens to sandwiches, hamburgers, and other fun foods.

Vitamin C, like lutein, is a powerful antioxidant that can help prevent cataracts. It also serves as a vital nutrient for full-body health, as it helps cells absorb iron. Basically, the entire body depends on sufficient Vitamin C intake to stay healthy and functioning.

Vitamin C was also an instrumental part of the study that resulted in AMD being classified as a “nutritionally-responsive disorder.”

Vitamin C is found mostly in fruits and vegetables; citrus fruits are an especially good source. A single cup of orange juice provides more than enough Vitamin C to exceed the FDA’s daily recommended intake of 90mg for males and 75mg for females. So, for the kids, a glass of O.J. at breakfast is the perfect way to get the daily dosage.

Like the other nutrients mentioned so far, Vitamin E is an antioxidant that can combat cataracts and AMD. Vitamin E also aids the body in absorbing vitamin A.

Research has shown that an increase in Vitamin E can aid in the absorption of beta-carotene and other important, vision-protecting nutrients and minerals.

Experts estimate that most Western diets are lacking in Vitamin E. The FDA recommends an intake of 22 IU (or International Units, a slightly outdated system of measurement). This makes nuts and salads important dietary additions.

The best sources of Vitamin E are nuts, peanut butter, sweet potatoes, and fortified cereal. Though you can also find it in salad vegetables and some oils. And since most kids love peanut butter and cereal, Vitamin E is an easy one to incorporate into your children’s nutrition!

Despite what the low-fat food industry says, fat is an essential component of the human diet. Two specific fatty acids can help improve and safeguard eye health, Omega-3 DHA and Omega-3 EPA. DHA is found in high concentrations in the retina, and EPA is required for the body to manufacture EPA.

DPA and EPA have been shown to be important for the formation of retinal muscles and other systems in the eye. Researchers believe the acids to be equally important in healthy eye function later in life.

Most naturally occurring omega-3 acids are found in fatty fish and sea-dwelling mammals. The American Heart Association recommends a daily intake of .5-1.0 grams of DPA and EPA. But, it estimates that the typical American consumes much less. Salmon, tuna, and mackerel are the best sources of omega-3.

When it comes to your children’s nutrition, zinc is an essential trace mineral, a ‘helper molecule’. It plays an important role in the body’s production of melanin, which functions as a protective pigment in the eye. Zinc also slows the effects of advanced AMD, so physicians recommend it, especially for people with a high risk of that disorder.

The FDA has recommended an intake of 11mg of zinc daily. Although research has shown that those with a high risk of AMD could benefit from a higher amount. High levels of zinc can cause stomach upset, however, and can interfere with the absorption of copper. The best sources of zinc include raw oysters, cooked red meat, and lobster.

All of the nutrients listed above play an important role in the development and maintenance of healthy eyes. For parents, it can be hard enough to make sure their children eat something green and leafy between cheeseburgers. Let alone make sure they get all the nutrients in the proper amounts. To get the proper nutrition in your children’s diet, supplementation is something to consider.

Speak with your pediatrician before starting a supplement regimen for children. And, keep in mind that the daily intake amounts quoted above are for adults. Children require smaller amounts of nutrients, increasing as they get older. Exercise caution when increasing amounts, speak to a doctor, and start laying that foundation for a lifetime of healthy vision.