When you hear the word ‘cataracts’, it’s pretty common to think of seniors. However, babies can also have cataracts; in infants, it’s called congenital cataracts. Out of every 10,000 babies born in developing countries, doctors diagnose one to three with cataracts. In the U.S., cataracts occur in three to four babies per 10,000.

Congenital cataracts happen in infants because the lens of their eye didn’t develop properly during pregnancy. Genetics often cause this issue in a fetus, but there can be other, less common causes as well. One such reason is the mother contracting Rubella while she was pregnant. Alternatively, the baby could have developed an infection in one or both eyes during delivery or shortly after birth. Often, it can happen for no known apparent reason.

In eyes that develop healthily, the lens, which helps you to focus on objects, is transparent. It allows you to see the objects you’re focusing on. When a cataract is present, the lens develops a milky white appearance which makes it too cloudy to see through. It can lead to seriously impaired vision and blindness.

If doctors do not diagnose babies with cataracts soon enough, it could prevent their eyes from reaching normal stages of development. However, once those babies reach adulthood, their cataracts are treatable. That means damage done to the eyes as a result of cataracts can be reversed.

The treatment for congenital cataracts involves a surgical procedure to remove the cataracts and then one of three things can occur. Either the doctor will implant an intraocular lens (IOL), the baby will wear contacts for several years before getting the IOL implant, or the baby will wear glasses.

Doctors usually recommend that the baby wear glasses if only one eye has a cataract. If both eyes have cataracts, glasses can help them to focus on light, but, at the same time, glasses can also greatly limit their field of vision. Since you have to remove and clean contacts regularly, which can be a hassle and lead to frustrations when dealing with a baby, many parents opt for implantation of the IOL.

There has been much debate amongst medical professionals as to whether contacts are as effective and safe as IOLs. Many people believe that contacts are not as effective as IOLs because of how easy it is to introduce germs into the eyes. When removing contacts, germs from your fingers can enter the eyes and infections can occur as a result.

There have also been concerns that contacts would not restore vision as well or as quickly as IOLs. Why? Patients do not wear contacts consistently, and they can accidentally dislodge them. However, there have been studies done to test the level of effectiveness of each treatment option and several of these studies show that contact lenses are just as effective as IOLs. Some doctors actually recommend that babies wear contact lenses until they get older – if the parents can handle the care that the use of contact lenses requires.

Another reason some doctors recommend contact lenses over IOLs is that babies are so small and cannot talk. They cannot express what they can actually see. This makes it hard for doctors to properly judge the focusing power of the IOLs on a life-long basis. If babies do not receive IOLs until they are older, the IOLs can be much more effective.

There are also more post-operative complications with the IOLs in babies that can lead to the need for more surgeries. The complication that occurs most commonly after cataract surgery is lens proliferation. This happens when remaining cells from the lens migrate to the pupil and obstruct vision. When this happens, your baby may need additional surgery to remove the cells. 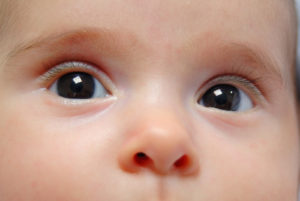 Babies are usually tested for cataracts within a few days after birth and then again when they are about two months old. If your baby is diagnosed with congenital cataracts at either of these two points, treatment can begin right away. However, cataracts can sometimes develop a little later on. It’s helpful to know what the signs are so if you notice something you can get your baby treated right away. This allows you to avoid any long-term developmental delays as a result.

If your baby is developing cataracts, they will have poor vision and/or their eyes may not be even. This means that while one eye might be centered properly, the other eye may be situated slightly off to one side. Or, in some cases, both eyes are slightly off-center. Some parents report not noticing that their children’s eyes are offset while looking at them in person. However, they later noticed it when they were looking at pictures taken of their baby.

If you notice these signs or other signs that something seems off about your baby’s vision, it would be wise to alert your baby’s pediatrician. They can then refer you to an ophthalmologist for further testing if necessary. The sooner you learn your baby has congenital cataracts, the less likely they will grow to have lasting vision problems.

Many parents neglect to bring their kids in for an eye exam before they start school because it doesn’t occur to them that it’s something they need to do. But, according to the American Optometric Association, children should have an eye exam by no later than six months old, then again by age three, and just before starting school. One easy way to remember these appointments is to book them with other annual appointments. Whenever you book their summer dental checkup, also book an eye checkup. Regular eye exams are the key to early detection and fast treatment, both for children and adults.