As we age, plenty of us find ourselves wishing for the clearer vision we had as children. After all, an awful lot of the conditions we like to talk about on Rebuild Your Vision – cataracts, presbyopia, macular degeneration – are all associated with older bodies rather than youthful ones.

But younger eyes are anything but indestructible. Childhood threats to visual health run the gamut from disease to injury. Your child probably won’t develop glaucoma during their younger years, but there’s plenty of other preventable issues to worry about.

Parents should take particular care in laying a solid foundation for good eye health early. After all, eyes aren’t nearly as resilient as other body parts. Problems incurred when we’re young have a nasty tendency to stick with us as we get older, often becoming more severe as they do.

Comprehensive eye exams are an absolutely vital step to catching eye disorders early on. Early detection gives physicians a better chance to deal with them before they get worse. It’s common for schools to offer at least basic screening conducted by a school nurse or similar employee. For some children, though, this isn’t enough.

These compulsory exams do a decent job of measuring how sharp a child’s vision is. However, they tend to miss out on more subtle problems. Misaligned eyes, or ones that don’t work in sync, are common. This condition is known as strabismus. It’s relatively common and not entirely difficult to treat, but can lead to much nastier problems if not addressed. Specifically amblyopia, a sharp decrease in vision in one eye as the brain – grappling with two sources of information that don’t entirely agree – starts to prioritize signals from one eye at the expense of another.

You’ll have to visit a certified professional for a complete exam. Ophthalmologists and optometrists are both good places to start. Holistic practitioners, often called behavioral optometrists, are also a potential port of call, though we’d encourage researching these physicians on an individual basis, as they don’t have the same standardized credentials as their more mainstream colleagues.

Cost can look like a barrier to these more intensive visits, but parents will be glad to know that several organizations are devoted to defraying the cost or providing exams free of charge. Local Lions’ Clubs vary greatly from city to city but will often have a program in place to help out cash-strapped families. National groups also do their best to help. Eyecare America, for example, provides free services from volunteer ophthalmologists, including exams.

As mentioned, a long list of vision problems are apparently relegated to older eyes. However, in some cases, they can trace their roots back to childhood habits.

UV light can quickly damage just about any exposed body parts – just think of the last time you wound up with pink and peeling shoulders after a day at the beach. Eyes feel the same effects, and it’s even possible for them to experience a condition extremely close to sunburn (and arguably even more unpleasant) if you spend too much time outside without a pair of sunglasses. 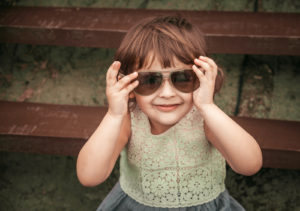 This isn’t to say that children shouldn’t spend time outside; just the opposite, in fact. Sunlight is key in healthy development of sight. However, it still pays to be careful when it comes to eyes. Always bring a pair of sunglasses for your children, and heavily encourage wearing them. Invest in some (UV protection) Disney branded shades if you must – whatever it takes to get younger adventurers interested in them.

Pediatrician Dr. Anna Mendenhall recommends that children start wearing sunglasses as early as possible, although infants under the age of six months should not be exposed to the sun at all. To protect your newborn, make sure they wear a sunhat during the summer and pull the stroller shade as low as possible to protect their young skin.

Kids who don’t wear sunglasses during their childhood are at risk of developing a wide range of issues later in life. Those problems include glaucoma, cataracts, and even possibly macular degeneration – the trinity of extremely serious late-life visual diseases. The earlier that sunglasses are adopted, the less chance these serious and long-lasting effects have to snowball into a major condition.

An increasingly popular theory concerning the cause of adult eye disease is that of oxidative stress. Oxidative stress occurs when various stimuli – including UV light, smoking, and various harmful chemicals – cause a proliferation of damaging free radicals in the body.

More and more physicians believe that the cumulative effect of these chemicals can eventually lead to changes that give rise to diseases such as cataracts.

Keeping levels healthy requires making some positive lifestyle choices. Smokers, for example, place themselves under much greater oxidative stress, as do people with a penchant for avoiding sunblock. However, people who keep a healthy diet do the exact opposite. Leafy greens, for example, contain loads of antioxidants capable of nullifying free radicals and preventing oxidative damage.

Recent scholarship has also shown the benefit of certain vitamins, like Vitamins C and E, in the prevention of cataracts. These vitamins are also antioxidants, which help reduce the oxidation rate of cells in the eye, thus reducing the risk of developing cataracts. This isn’t cause to pump children full of excess vitamins. If anything, these can cause more harm than good. Instead, follow a healthy diet and do your best to encourage their doing the same in later life.

Kids and teens are frequent contact users, but not always the healthiest ones. Even adult wearers can easily get themselves in trouble if they neglect to consistently disinfect and clean their lenses. Contact-based eye infections are a major threat to all wearers, but younger users are at particular risk.

Children tend to be slightly less meticulous about cleaning procedures – though adults aren’t often great either – and aren’t always as good about hand washing as they should be. Put these habits together, and you have a solid blueprint for a potentially dangerous infection.

By teaching your kids the importance of proper maintenance and checking in every so often to keep them honest, you’ll be taking some excellent steps towards keeping their eyes healthy.