Can you believe that sitting in a dark room for several days could improve your vision? It seems a little crazy, but some researchers in Canada have found that it may just work! Although it seems illogical to some, many experts are saying, “Of course!” In complete darkness, your eyes will be resting much more and allow some unique things to happen. That’s why it’s so important to get enough sleep to support your visual health.

The research in this study was focused on the eye disorder amblyopia, also commonly referred to as having a lazy eye. It affects nearly four percent of children. Having a lazy eye results in the visual stimulation either failing to deliver the visual message to the brain or transmitting a poor message. It usually only affects one eye and occurs in early childhood. Because of the difficulties caused by the lazy eye, the child has poor or blurry vision. This condition can eventually lead to permanent vision loss.

Researchers from Dalhousie University in Canada used cats to conduct the study. First the researchers took some kittens from a litter and closed the lid of one of their eyes for a week to cause amblyopia. The researchers examined cats with visual impairments. Then, they placed the cats in complete darkness for 10 consecutive days along with their littermates and their mother. After the cats reemerged into light, their eyesight was once again examined.

The researchers monitored the cats by infrared cameras. They also fed, cleaned, and checked on the cats throughout the day. To ensure the cats had a stimulus to simulate the day-night cycle, the researchers played a radio at set times during the day.

The immersion into total darkness seemed to reset the visual brain and enable remarkable recovery. The researchers believe that a treatment to restore vision by turning out the lights may be in the cards in the future. Even though the whole idea seems very simplistic, they were pleased with the results from the study. They stated, “There may be ways to increase brain plasticity and recover from disorders such as amblyopia without drug intervention.”

However, he cure was not immediate for the kittens. According to the study, “the vision of both eyes improved slowly but in lockstep and eventually reached normal visual acuity, in about 70 days.”

But the researchers didn’t stop there. They induced amblyopia in the remaining kittens, but then waited between five and eight weeks to expose the kittens to the dark therapy. They wanted to see if there was a difference in treatment success of older kittens. And, the researchers were amazed at the results of this second component of the study.

They said of the second round of kittens, “When you put those animals in the dark for 10 days, when they come out, they recover – that is, their deprived (lazy) eye recovers to normal acuity levels within a week. And the curious result here is that firstly, when the animal’s older, the darkness doesn’t reduce the visual acuity of the non-deprived eye as it did in the younger animals, which is very good because you don’t want to compromise the vision of (that) eye. The second, probably more astonishing, result is the acuity of the amblyopic eye complete recovered within one week.”

Dark therapy is not a new idea; it has been used as a therapy for other disorders. It’s used to treat migraines, dyssomnia, chronic fatigue syndrome, asthma, depression, and fibromyalgia. Dark therapy usually involves a treatment in which all light is eliminated between six and 16 hours per day.

Other Treatment Options for Amblyopia

One of the most common ways to treat amblyopia is with an eye patch. The theory behind this treatment is to cover up the healthy eye and force the “lazy” eye to work harder and become stronger. Some children hate the patch and refuse to wear it. So, another treatment which uses the same theory distorts the vision in the healthy eye through eye drops. This way a child cannot just remove the patch; they have no control over the vision created in the healthy eye after the drops have been inserted.

Another treatment that some receive is vision correction through either surgery or corrective lenses. Both have their risks and are not guaranteed to fix the problem. Natural treatments would seem to be a better first choice for most people. 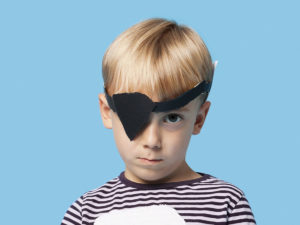 One of the ways to treat any poor vision problem is by addressing the weakness of the eyes. There are eye exercise programs which can help build your vision to 100 percent naturally. Another natural alternative for eye treatment is through proper vitamins and minerals for healthy vision. Try an eye vitamin supplement like our Ocu-Plus Formula.

It seems the researchers at Dalhousie University in Canada are on the right track with dark therapy as a natural eye treatment. More research will have to be conducted of course, and an acceptable form of the therapy will have to be created for humans. Since the cats were left in complete darkness for 10 days, this is not a realistic expectation for human children.

Experts warn that certain steps must be taken in the care of the eyes. They say that the first step is to find the underlying cause of the amblyopia so a treatment can be decided on. They also warn parents that not enough research has been done to determine what the process will be for treating patients, so parents should not attempt dark therapy on their own.

Until more research is done, fall back on natural treatment methods. Ensure your child eats a nutritious diet full of the vitamins and minerals that are crucial for vision health. Teach them how to do different eye exercises. You may want to create a routine of doing these exercises after each meal. Encourage them to play outside instead of being glued to a screen all day. One day, dark therapy in some form may be the solution to childhood vision problems.