Home > Food For Your Eyes > All About Selenium

Selenium is a trace mineral that is absolutely essential to the body. I know, we’ve said that about every trace mineral and ingredient for our Ocu-Plus Formula, but it is simply the truth.

Many people are under the impression that because a mineral is only found and required in trace amounts in our bodies, it’s not such a big deal. Well, it is a big deal. You may not be aware of it, but your body is.

Selenium is one of those trace minerals that you’ve probably never heard of. It may be an obscure mineral, but when you think about it, even The Beatles were obscure at one point. Today, we know they are arguably one of the most influential musical acts in the history of the world.

Maybe that’s an extreme comparison, but you get the idea. A band may be playing a gig at the local tavern one night and the next they’re on The Ed Sullivan Show. Selenium may be quietly helping your body one day, but the next it could save you from developing cataracts.

See? We told you it was an important mineral. Now that we’ve got you hooked and interested, let’s find out more about selenium and what it is, where it comes from and how it’s helping eyes everywhere.

If it wasn’t clear in the intro, selenium is a mineral. It’s a strange mineral because it is almost never found in its natural form. Often, it’s found in metal sulfite ores (fancy word for rocks that have high amounts of extractable minerals), which often replaces sulphur.

Selenium was first discovered by Jöns Jacob Berzelius in 1817. Berzelius, a Swedish chemist, is often regarded as one of the founders of modern chemistry.

He discovered selenium by chance when he was preparing sulfuric acid. He noticed some residue which he first took to be the element tellurium (another element he discovered, actually). However, upon closer examination, he found that it was a new element that he then named selenium after the Greek word for moon, selènè.

Compared to some other elements, selenium is a baby. But it didn’t take long after its discovery for chemists and scientists to figure out that it plays a crucial role in cell developments in all animals, including humans.

Antioxidants Are at it Again!

Selenium acts as an antioxidant in the body. It fights free radicals to keep cells healthy. If free radicals were to take over a cell, it could mean severe damage and sometimes the death of that cell. Though our bodies produce trillions of cells, once one cell succumbs to free radicals, there is sure to be a chain reaction.

By now, you’re probably aware that most of our Ocu-Plus ingredients act as antioxidants. This should be a clear indication of how important antioxidants are. The more you have, the better. All it takes is for one free radical to slip past an antioxidant to wreak sufficient havoc on the body.

A low amount of selenium in the body can mean a lot of bad things. Though a selenium deficiency is uncommon in the US, doctors have found a correlation between low selenium levels and HIV and Crohn’s Disease patients. It has been suggested that selenium deficiency increases men’s risks of developing prostate cancer, but more research is still needed.

That being said, one thing doctors are sure of is that selenium does help the eyes fight cataracts. Cataracts form when there’s a build-up of old cells on the lens, which then causes loss of central vision. This disease can be debilitating especially for those over the age of 60, who suffer the most from cataracts.

Because of this trace mineral antioxidant properties, selenium can help protect the lens of the eye. The cells that build-up on the lens are often non-functioning or dead. Selenium will prevent these cells from forming on the lens to better protect your vision.

This mineral has also been linked to preventing glaucoma, which is caused by high pressure in the eye. Selenium and zinc work together to keep intraocular pressures low.

Without selenium in the body, zinc cannot work properly to keep your vision healthy. This is why it is so important to get all your vitamins and nutrients to ensure healthier vision.

Where Is Selenium Found? 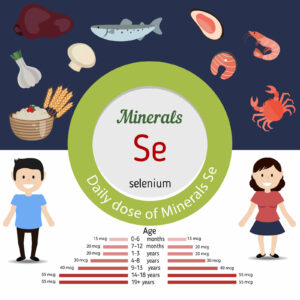 Selenium can be found in so many common foods and supplements that it’s easily understood why deficiencies are so rare.

This mineral is most commonly found in foods like nuts, meat, fish and even some seeds. Because selenium is only needed in very, very trace amounts, you could get your daily required amount from a single dry brazil nut. That’s it. It is so simple that it’s almost unbelievable.

Selenium can even be found in various dietary supplements. Maybe you’re allergic to nuts, or perhaps you’re a vegetarian. Whatever your dietary restrictions, supplements exist to make up for the nutrients you might be missing by not eating certain foods.

A popular dietary supplement is baby formula. Selenium is often found in baby formula to encourage proper and healthy cell growth. But, if you’re not a baby, this mineral can also be found in supplement pill form or in our Ocu-Plus Formula.

If you choose to take pill supplements (or any other supplements that don’t come with already measured amounts of selenium, like the Ocu-Plus Formula), make sure to consult your doctor about it to get the right dosage. In high amounts, this mineral is toxic and has been linked to increasing your risk for certain types of skin cancer.

Like it was mentioned before, you can get your daily intake of selenium from one brazil nut. Most likely, if you’re eating a healthy and balanced diet, you won’t need to worry too much about your selenium intake. But just in case, here is a list of foods rich in this mineral:

I’m salivating just thinking about all this delicious food. Being healthy doesn’t and shouldn’t have to be a struggle. Take care of your body, and your eyes will follow.