This next ingredient on our list is N-Acetyl Cysteine, or NAC for short. NAC is probably the most underrated ingredient in our Ocu-Plus Formula. It is so underrated that even many doctors don’t fully know what this compound element is capable of treating.

Trust us when we say NAC is capable of more than you would ever imagine 1. From being an antidote to various degrees of poisoning to helping prevent vision loss, NAC is an element all scientists should be tapping into when it comes to curing ailments. Unfortunately this is not the case as NAC is often brushed aside.

Let’s find out why we should be spending more energy unpacking NAC to discover its full potential and healing properties.

Some of these ingredients can be difficult to pronounce, so you can probably guess that explaining what they are won’t be a walk in the park. But, you don’t need to understand scientific jargon to understand what’s going on in your body and how you can keep yourself healthy. 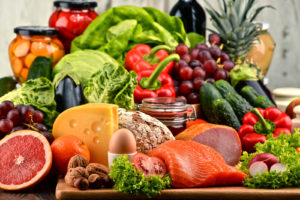 So don’t stress out about not being able to pronounce NAC’s non abbreviated name, it’s actually a simple ingredient to understand. NAC is an amino acid. Amino acids are the building blocks for protein in the body. As we all know, protein is essential to our overall wellbeing.

NAC has a very interesting history. It has been used in medicine for 30 years now, but no one has used it to its full potential yet. Today NAC is often used to combine with other compounds to create various types of medication. For example NAC is an active ingredient in brands such as Tylenol, Vicodin and Percocet.

NAC is also used to counter overdoses. Acetaminophen (another ingredient in medication to treat various aches like Tylenol) overdoses can cause a terrible amount of irreversible liver damage. However, the NAC present in Tylenol and similar medication keep the balance in the body and prevent overdoses.

You may remember last month when we discussed glutathione and how glutathione deficiencies are often found in very ill people suffering from various diseases? Well, when NAC restores balance in the body, it’s balancing the acetaminophen and the glutathione, making sure that the glutathione levels don’t drop.

NAC, though it continues to be misunderstood by the scientific community is a treatment that will continue to develop as researchers learn more about NAC and glutathione. Everything in the body is connected including the potential cures to our diseases!

NAC for the Eyes

Because it’s so closely tied to glutathione, it’s really no surprise that NAC can help to prevent losing your vision. NAC has also been shown to help with blepharitis symptoms which include eyelid inflammation, and irritation and redness in the eye. NAC in eye drop form has also been reported to help lubricate the eye of those with dry eye syndrome.

New NAC eye drops are also being developed and tested with the hope of one day being able to dissolve cataracts. Tests have often resulted in unpredictable conclusions meaning the eye drops are not ready for public use. However, these findings mean that tests will continue to be conducted as the eye drops are modified to give more predictable and reliable results.

But you don’t need to have developed cataracts or dry eyes to benefit from this powerful amino acid. Taking preventative measures is half the battle. Before vision conditions and serious diseases even have the slightest notion to form, hit them with high levels of NAC.

The better you take care of your body, the better your eyes will be. Vision loss affects almost everyone once they reach old age (sometimes by middle aged, if they’re unlucky). If you’re young, take the precautions now. If you’re in your golden years, NAC will help stop the progression of vision loss. It’s really a win for everyone at every age!

Where Is NAC Found?

NAC is found in a myriad of places. It’s obviously found in various medications as we mentioned before, but it’s also available in supplement form. NAC supplements often come in capsule form and can be found in your local pharmacy.

NAC is sometimes used as an inhalant among pulmonary specialists for conditions such as cystic fibrosis. Although NAC as an inhalant, has not been widely used outside of pulmonary studies and treatments.

NAC is of course one of our key ingredients in the Ocu-Plus Formula. This formula provides you with all the NAC you could possibly need in addition to 16 other vital nutrients and vitamins. It is definitely worth a consideration.

NAC isn’t only found in various supplements, it’s also found in some nice and hardy foods. Getting your daily intake of NAC from food is easier than you may think. You won’t have to go out and buy crazy complicated ingredients. All your NAC can be found in local foods that are sure to please.

For you vegetarians out there, animal proteins are not the only solution. NAC is found in broccoli, bananas, onions, red peppers, garlic, and soy beans. It can also be found in oats and granola.

Being healthy and staying healthy is as easy as continuing to eat your favorite foods. If you’re like me and your culinary skills are below par, a quick google search will give you endless recipes for cooking your favorite healthy meals.

NAC is so easy to get into your diet. Don’t be lazy! Take care of your eyes and keep your vision strong for longer.

Tags: all about ocu-plusOcu-Plus Formula