Of all the sudden changes that we can experience with our sight, double vision is probably among the most alarming. Also called diplopia, double vision has a number of causes, but all result in roughly the same problem – seeing one too many of each object you look at.

Most of us have experienced double vision at some point. In most cases, this is intentional. If you haven’t done it before, hold a finger out in front of your nose, then slowly draw it in closer while keeping your eyes focused on it. Your eyes will cross, you’ll suddenly see two fingers instead of one and anyone watching you will probably laugh.

But in some cases, diplopia is more cause for concern. A number of more serious illnesses and injuries can all cause it. There are a few ways to be prepared for double vision so you can fix it naturally and safely.

Let’s start with the stereotypical one. As seen in numerous cartoons, a sharp blow to the head can have you seeing double in a hurry. While this is generally passed off as comical, the reality is anything but. Diplopia that follows head trauma and lasts for more than a few seconds generally indicates some more serious injury and is a component of what physicians call post trauma vision syndrome, a collection of symptoms that also includes blurring and perceiving motion where there is none.

Having a slightly-too-wild Saturday night is another way to put yourself on the path to double vision. Alcohol can have a number of neurological affects and one of the functions it seems to affect is the brain’s ability to coordinate eye movements. Have a few too many and you’ll slow down the rate at which your visual system synchronizes information from your two eyes. This can lead to a couple of overlapping channels and, as expected, some double vision.

Double vision is also a hallmark symptom of migraine headaches. Those unlucky enough to have these awful episodes may have “aura” phases that precede actual headaches. Visual effects are the most common during auras, though sensory changes and other symptoms can also appear. For some migraine sufferers, diplopia is consequently an early warning sign of an oncoming attack.

A number of more serious chronic diseases and conditions can also cause diplopia. We’ll kick this section off by noting that unexpected double vision is nearly always a good reason to start looking around for a doctor.

Strokes, aneurysms, and tumors are all capable of dealing serious damage to the brain. If one of these issues affects the parts of your brain responsible for processing visual information, you could well wind up with double vision, as well as other visual phenomena.

Progressive diseases that affect the nerves can slowly zap the body’s ability to properly use the extraocular muscles responsible for eye movements. This can cause reduce the coordination between eyes and eventually cause double vision. Multiple sclerosis is the best-known disease in this category. More commonly, diabetes can also result in severe nerve damage, giving rise to symptoms similar to those seen in MS, including diplopia. 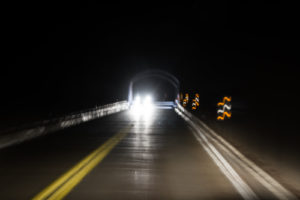 Even simpler, mechanical problems in the eyes can cause double vision. Cataracts occur when proteins in the eye turn opaque, blocking and diverting light entering the eye. They’re enormously common among older individuals and can easily cause double vision if deposits scatter light and lead the eye to perceive multiples of an object. Infections and injuries to the cornea can also cause double vision. Again, that’s because they may cause a change in the way light enters the eye. Extreme dry eye, a problem occasionally encountered by office workers who spend too much time on digital devices, can also result in passing double vision.

In some cases – particularly those involving beer – the best cure for diplopia is to simply wait it out. The effects of alcohol will usually fade overnight. So, even if you’ve gone to bed with double vision, you’ll likely wake up without it. Though we can’t speak to the likelihood of a hangover.

However, in many others, waiting isn’t a good idea at all. In fact, if you notice the sudden onset of double vision, it’s generally a sign that you need to speak up, and potentially seek emergency attention. Double vision, on its own, is generally more annoying than actively dangerous. But, it can be an indication of serious damage to the brain. Strokes, for example, can cause diplopia. If caught early, these and other major incidents can be handled before they cause too much trouble. If left to wait, many have the potential to be fatal.

For other, consistent cases, physicians turn to a range of basic therapies. While the practice isn’t as prevalent as before, “pirate patching” or simply covering one eye is a quick and easy fix for binocular double vision. Although, it won’t treat any underlying causes and should only be done in concert with more proactive therapy. Prism correction can also be helpful and works by reworking the path that light takes when entering the eye.

Eye vitamins also have their places in treating diplopia. It’s very common for the problem to originate from weak or poorly controlled extraocular muscles. So, incorporating the right nutrients, vitamins, minerals, and herbs into your diet can help restore those muscles to healthy levels of activity, eliminating some of the primary causes of double vision.