Home > Food For Your Eyes > Facts and Myths About Carrots: What They Can Do for Your Eyes

We’ve all heard it before: “Eat your carrots, they’re good for your eyes!” Granted, in most cases, our parents told us this at age five or six and we adamantly refused to eat whatever carrot-containing meal a parent had made. But their advice wasn’t just empty lip-service – well, not all of it, at least. Carrots aren’t exactly the silver bullet for your eyes they’re often made out to be. They certainly won’t give us the night-vision superpowers we all secretly hope for, but they do have some pretty amazing health benefits. The truth of the matter is that there is a truly beneficial relationship between carrots and your eyes.

The main claim you’ve probably heard about carrots before is that they can vastly enhance your night vision. And there is a nucleus of truth in that statement.– eating carrots can help your body manufacture vitamin A (more on that in a moment), which in turn is necessary for the production of rhodopsin, a visual pigment that allows us to see at night.

Fail to get enough vitamin A sources in your diet and night vision is one of the first things to go. However, the flip side to that idea – that eating an enormous amount of vitamin A-containing foods can turn your peepers into a pair of night-vision goggles – isn’t quite the case.

And that myth has some interesting origins. Far from just being an eternal parental slogan, the relationship between carrots and eyes at night actually a piece of WWII propaganda. During the famous London Blitz, German bombing raids were a nightly reality, and initially there wasn’t much that Britain could offer in defense. Ground-based defenses were costly and inaccurate, while British planes, flying all but blind in the night, were completely ineffective. Both systems would eventually tighten up, but it was the latter that would eventually pave the way to the end of the Blitz.

Royal Air Force planes eventually began using air-based radar, which was revolutionary at the time, allowing them to effectively locate and attack German bombers. The British military, always keen to throw up a smokescreen around new technology, credited the success to their pilots’ carrot-enhanced night vision. There’s no guarantee the Germans ever bought the story, but civilians apparently did, and the legend has held into the 21st century.

What’s in a Root

So what exactly does make carrots useful? The answer is actually in their coloration. Carrots owe their bright orange tones to a pigment called beta-carotene. As you might guess, beta-carotene is red-orange in coloration, and occurs naturally in many fruits and vegetables. And while carrots might be the current poster children for the pigment, that wasn’t always the case. Prepare for another historical interlude.

If you had happened to be an inhabitant of the 17th century, you’d have been eating a very different sort of carrot. They’d be differently colored, at least, as the carrot cultivars of the age were actually purple, yellow, and white. It was only in the 18th century that an orange strain with higher levels of beta-carotene was developed. The orange carrot’s current dominance is actually the result of a political quirk.

At the time, one of the most famous Dutch figures was William, who led the Dutch in a victorious revolt against Spain in 1544. William’s seat just happened to be a place in France, which was traditionally pronounced “Aurenja”, which was eventually conflated with the French word for “Orange”… you can probably guess where this is going. In any event, you have some enthusiastic, carrot-farming fans of William of Orange to thank for your modern roots.

History aside, beta-carotene does serve an important role in the human diet. The pigment is a major precursor of vitamin A. As mentioned above, this does help the body manufacture chemicals important for night-vision. More than that though, it simply helps keep the eyes healthy.

Vitamin A deficiency has a whole range of nasty effects on the body, but they do seem to get even nastier around the eyes. Fail to get enough vitamin A and you’ll first lose night-vision. Dry eyes follow after that, then development of Bitot’s spots (opaque deposits on the eye.  Eventually, a vitamin A deficiency will instigate the destruction of the cornea, with blindness being the end result. 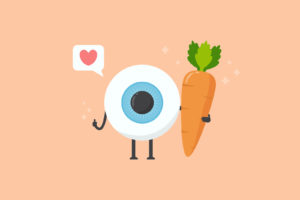 So does eating carrots help keep your eyes healthy? Absolutely! Eat them as often as you can.

If you can’t get them or don’t like them for any reason, don’t worry, though. Carrots are far from the only options if you’re looking for a good source of vitamin A. Liver might not be your first dietary choice, but if you’re concerned about your vitamin A intake, there’s no richer source – too rich, in some cases. Eating a polar bear liver can literally give you a vitamin A overdose.

More appealing (and less exotic) options include sweet potato, pumpkin, butter, egg, cantaloupe, kale and spinach. As a general rule of thumb, the more vivid the color of the vegetable or fruit, the more beta-carotene it has. So load up!

Some Other Vision Superfoods

Turns out that if your parents were partly right about their choice of eye healthy food, Popeye was totally right. Spinach is packed with beneficial nutrients. It’s got some beta-carotene, but also a load of lutein, another carotene that can help protect eyes against macular degeneration.

Fish, with salmon being the common example, is also a great choice. The fats you’ll find in coldwater fish can work to stave off the damage caused by both macular degeneration and diabetic retinopathy. Finally, stock up on some berries for their beneficial cardiovascular effects. High blood pressure can easily make a case of macular degeneration worse. However, the dark pigments found in blackberries and blueberries have some additional anti-inflammatory bonuses.

Incorporating a few vision-enhancing superfoods into you diet can really help in the prevention and treatment of common vision problems. The best move forward is to eat a healthy diet, but also try adding in eye vitamins every day. You’ll really see the difference!