Something you may not have thought about before is your risk for developing glaucoma. If you’re a regular Rebuild Your Vision reader, you’ve heard us talk about this disease before, but if you’re young, you probably haven’t given it too much thought.  It’s true –  younger readers aren’t really at risk of developing glaucoma in the immediate future. However, if you’re over 60 years old, or have a family history of glaucoma, you should start taking some steps toward glaucoma prevention. 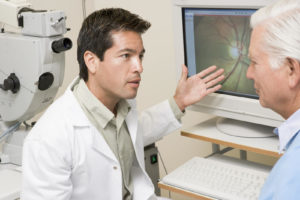 Glaucoma is a common, often very hard-to-catch eye disorder. So hard to catch, in fact, that a comprehensive examination is often the only way to definitively diagnose it. Although no one likes to visit the ophthalmologist any more than they have to, early detection of glaucoma is the closest thing you’ll find to a guarantee of effective treatment. The longer a case goes untreated, the more damage it does. This ultimately makes the disease much harder to treat.

If you fall into any of the at-risk demographics (we’ll go over them below), and even if you don’t, consider making time for an appointment sooner rather than later. After all, it may be the one thing that saves your sight.

Glaucoma is a widely applied term that covers a range of diseases that damage the optic nerve, a part of the eye responsible for relaying visual information to the brain. However, for most intents and purposes, the word refers to one disease: primary open-angle glaucoma. Open-angle glaucoma affects as many as one percent of all Americans, many of whom have absolutely no idea that they’re living with it.

Often referred to as “the silent killer of sight,” open-angle glaucoma progresses without causing any obvious symptoms – or really any symptoms at all. While the exact causes are still being studied, open-angle glaucoma manifests as very slowly increasing intraocular (within the eye) pressure. As this occurs, the cornea adapts, but does not swell, meaning that the disease can progress without any physical signs. Prolonged exposure to this higher pressure will eventually kill nerve cells in the eye, which causes a glaucoma patient to lose parts of their field of (usually peripheral) vision.

Age is often the primary risk factor for the development of glaucoma. The older you are, the more likely you are to run into the disease. Risks become particularly pronounced for anyone 60 years of age or older.

Race also figures into the conversation. Some ethnic backgrounds are more predisposed to glaucoma. African Americans have an elevated chance to contract glaucoma, and also tend to do so at younger ages, and should start scheduling exams after age 40. Those of Latinx and Asian descent should also be extra wary of glaucoma.

As with many other diseases, family history is also important. If you have relatives, particularly close relatives, who have developed the disease, you yourself are likely at greater risk as well.

Other factors may also be important in determining risk. Diabetics often have damaged blood vessels in their eyes, a problem that can lead to impaired blood flow, followed by an increase in intraocular pressure. Hypertension may also stack the odds against you. Various eye disorders can indicate a potentially at-risk eye – nearsightedness (myopia), farsightedness (hyperopia), eye inflammation or injury, and certain types of eye surgery have all been identified as red flags.

The sneaky progression of glaucoma makes it highly unlikely for a sufferer to diagnose themselves. Closed-angle glaucoma, a different variant of the disease, can announce itself with an incredibly painful acute closure. Still, closed-angle accounts for only 10 percent of glaucoma cases, while open-angle, the much more common version, is completely painless.

Loss of peripheral vision can be a sign of advancing glaucoma, but it happens much too slowly for an average glaucoma patient to notice. No, the only sure way to catch glaucoma is to schedule regular exams. Your visit frequency can vary depending on your risk factors, but if you’re over 40, you should start getting screened semi-regularly. If you’re older than 65, you should be checked every two years. If you’re at risk, you should schedule screenings even more frequently.

Once inside an ophthalmologist’s office, glaucoma becomes a little easier to catch. A physician can test intraocular pressure, field of vision, corneal thickness, and do a fluid-tracking test called a gonioscopy. And after a case is detected, treatment can begin.

There’s also another type of glaucoma, normal-tension glaucoma, that you should be on the lookout for if you have family history of this disease. This version is a bit more rare, but it’s also much harder to detect. This is why knowing your family’s history of vision disorders is so important – it’s the best form of glaucoma prevention.

While there’s no full cure for glaucoma, early treatment can control the disease. It can even halt its progression and provide extra years of healthy vision to a patient. Many people try natural remedies like changing their diets and adding in vitamins for glaucoma, but prescribed eye drops and pills are a good first step and can effectively reduce the buildup of pressure within the eye. If taken consistently, this is often enough to keep an advancing case at bay without taking more drastic measures.

If drastic measures are called for, surgery is the go-to solution. Laser surgery either relies on either increasing the drainage capacity of an eye, or damaging its ability to manufacture more fluid. The net result of either method is hopefully a reduction in the volume of liquid in the eye. If laser surgery fails, traditional surgery is the next step. Surgeons seek to create new drainage paths for fluid, or to implant small drainage devices. These options are important to consider if your disease has progressed too far.

In any case, it’s important to note that early treatment is vital. Increasing intraocular pressure isn’t a death knell for healthy sight, but it has to be controlled quickly. If left unchecked, the damage it does to nerves in the eye is completely irreversible. Sometimes, it’s best not to delay that exam; if you have more than one of the risk factors listed above, schedule an eye exam. After all, early detection is the best form of glaucoma prevention.

Our Rebuild Your Vision Ocu-Plus Formula Contains All 17 Vitamins, Minerals, and Herbal Supplements to Protect Against Glaucoma!