Most modern workers know the feeling. It’s time for work and you stayed out just a little too late last night. You stumble in to the office, toss back the strongest coffee you can find and hunker down for a new day. And, if you can survive the morning meetings, you’ve made it through, right?

Caffeine might be able to clear the fog in the short term and a longer night of sleep might have you feeling better, but those short nights have some lasting effects beyond simple alertness. Lack of sleep can increase your odds of becoming obese, suppress growth hormones, and even potentially put you at greater risk of mental illness.

Your eyes are also far from immune. The visual system is a sensitive one and is one of the first to be heavily affected by lack of sleep.

Dry, irritated eyes are often one of the first signs that something’s wrong with your peepers. Everything from seasonal allergies to hormonal changes to computer work can impact your body’s ability to create tears. Sleep represents a crucial chance for the body to repair and refresh after a long day – interrupt it, and you’ll wind up short on natural lubrication.

While dry eye might seem like a mild inconvenience, it can make your day-to-day life absolutely miserable if not properly remedied. Rubbing is a natural response to the itch and burn of dry eye, but not necessarily a healthy one. Excess rubbing can carry bacteria to your eyes, putting you at risk for a serious infection.

On a more aesthetic level, it also contributes to the classic dark circles you’ll see under sleep-short eyes. These smudges are bruises and appear in part because frequent rubbing damages the sensitive, blood-vessel rich skin around the eyes. Other key contributing factors include blood pooling – another common side effect of sleep deprivation – and burst vessels caused by eye strain.

In an ideal situation, dry eye is handled by directly working to treat the underlying problem – in this case sleep debt. But for those who find that difficult, either because of persistent insomnia or unusual work hours, eye drops may be the best solution. These synthetic tears are a quick, simple way to replenish a shortfall of natural moisture.

Ever had an eyelid quiver for a few seconds? Probably happened after you had one too many sips of espresso, or one too few hours of sleep? If the answer is yes, then you’ve experienced myokymia, or a localized, small-scale muscular spasm, usually affecting tissue around the eye.

Myokymia isn’t a serious issue in and of itself. It’s more irritating than it is anything else and generally sorts itself out without treatment. However, if you do have a visually intensive job, it can constitute a potentially dangerous distraction.

As with the other conditions in the article, it’s best treated by getting a few more hours of sleep. Barring that, take it easy on the caffeine, look away from the computer more often, or place a slightly warm compress over your eyes.

Also called AION, this one’s a little more serious than the previous entries. AION comes in two different forms – arteritic and non-arteritic – but both are caused when parts of the optic nerve are damaged by low blood supply. The result is almost always a permanent loss of vision, though in most cases, patients will keep at least part of their visual field and often recover some of their lost acuity.

While the exact mechanisms behind the disorder are still being investigated, a primary risk factor seems to be sleep apnea, or interruptions to breathing during sleep. These pauses or modifications can cause sleep deprivation, but they also appear to starve the body of oxygen and can quickly affect the sensitive optic nerve.

Sleep apnea is more common than you might expect. A 2008 review of studies on apnea published in the Expert Review of Respiratory Medicine found that prevalence was generally estimated to be between three to nine percent for men, and one to four percent for women. People with the disorder generally rely on specialized sleep masks to ensure uninterrupted breathing. 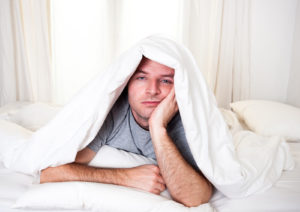 If you do find yourself dealing with consistently minimal sleep, it’s time to start addressing the problem. Short sleep can cause an enormous number of health effects, but as this is Rebuild Your Vision, we’ll start with the visual bottom line: fail to get enough sleep and not only will your eyes be more uncomfortable on a day-to-day basis, but they’ll also be exposed to a wide variety of risks that wouldn’t otherwise be an issue.

Our favorite piece of sleep-increasing advice is to try to curtail digital device usage at night. Smartphones and tablets have become popular replacements for books or other quiet, pre-bed entertainment. However, the blue light they emit mimics early-morning conditions and throws off your body’s natural sleep cycle. Additionally, it may also deal direct damage to the optic nerve over time, making this habit a double whammy  the eyes.

We’d also highly recommend giving eye vitamins and proper nutrition a try. Vision-enhancing supplements can help reduce eye strain, counteracting some of the effects of sleep deprivation, and can relieve some of the irritation caused by dry eye. Try it and you’ll find yourself waking up with happier, more comfortable eyes.