It’s a long-known problem: obesity has reached epidemic rates in many countries. Despite recent programs and educational initiatives, obesity remains stubbornly sky-high. According to the CDC, over a third of American adults are currently classified as obese. But how does your weight affect your eyes? 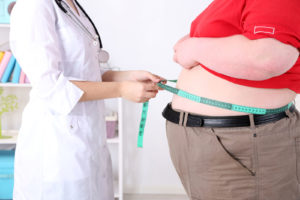 Not only is it widespread, but obesity also has devastating health effects. Heart disease, type 2 diabetes, and some cancers – some of the leading causes of death in the US – are all exacerbated by unhealthily high weight. These serious diseases aside, obesity can lead to raised blood pressure, gallstones, arthritis, and respiratory disorders.

Now, add eye disorders to the list. While other issues often overshadow visual health in the conversation about weight, obesity can cause and worsen a wide range of eye diseases.

Diabetic Retinopathy, Your Weight & Your Eyes

Type 2 diabetes has soared alongside obesity. While the causes of the metabolic disorder are diverse, obesity and related factors, such as a sedentary lifestyle and poor diet, are known to contribute to relative risk of contracting diabetes. Diabetics are at heightened risk of several eye disorders, including glaucoma and cataracts. However, the greatest threat to their eyes is diabetic retinopathy.

Diabetic retinopathy is progressive, serious, and incredibly widespread. Odds of experiencing the condition increase for diabetics who have dealt with the disease for longer periods of time. Newly diagnosed diabetics are at a roughly 20 percent risk of experiencing retinopathy. Ten years after diagnosis, prevalence soars to 80 percent.

Retinopathy occurs when tiny blood vessels in the eye, damaged by chronic high blood sugar, weaken, break, or grow abnormally. The result is damage to the retina, the light-sensitive membrane at the back of the eye. Over time, and without treatment, blindness ensues.

The severity of diabetic retinopathy appears to worsen for individuals with higher BMIs. The exact mechanism behind the relationship is still being studied. Some researchers have pointed to obese individuals’ higher blood pressure and higher levels of blood lipids as being worsening factors for retinopathy. Others believe that chemicals that encourage the proliferation of blood vessels may be more heavily produced by obese people, which can exaggerate the underlying cause of retinopathy.

Luckily, there are some specific vitamins that diabetics can take in order to reduce their chances (and the severity of) diabetic retinopathy. Of course, the best way to prevent this disease is to avoid developing diabetes in the first place, which is why it’s important to watch what you eat and keep up healthy habits.

While the connection between obesity and glaucoma still requires research, several studies have suggested that it does exist. Glaucoma is an umbrella term, referring to a group of disorders that cause damage to the optic nerve, the primary means of communication between the eye and brain. An increase in pressure in the eye (intraocular pressure, or IOP) is also generally implied.

Most of the studies concerning obesity and glaucoma have focused on the link between obesity and IOP. IOP is one of the largest contributing factors to glaucoma and does seem to rise with increased body weight. Several studies have found that high BMI, regardless of age or sex, did have a corresponding effect on ocular hypertension.

Whether or not this correlation indicates a direct connection between obesity and glaucoma is still up for debate. The exact mechanisms also remain uncertain. Obesity may impair the body’s ability to healthily drain liquid from the eye, causing a dangerous buildup. Increased weight also contributes to hypertension and diabetes, which also correspond with glaucoma. Again, this is why it’s so important to eat a balanced and moderate diet full of vitamins and minerals.

Unlike glaucoma, there’s a large body of research that supports a hypothesized relationship between obesity and cataracts. Cataracts occur when an eye’s lens becomes cloudy, which often results from proteins denaturing with age. Treatment is relatively simple. Cataract surgery is one of the most common outpatient procedures performed in the US. However, cataracts remain a potentially serious disease. If left unchecked, they can impair vision even to the point of blindness.

Fat cells may be the cause. Also called adipocytes, these cells are the primary producers of a chemical signal called leptin. Obese individuals may even have hyperleptinemia, caused by overproduction of leptin. Hyperleptinemia in turn can cause the body to stockpile potentially damaging oxidizing agents, which have been proposed as a central cause of cataracts.

Also called AMD, age-related macular degeneration is a leading cause of blindness in adults over 50. AMD occurs either when deposits called drusin form on the retina, or when abnormal blood vessels begin to grow in the eye, similar to diabetic retinopathy.

In either case, the result is the loss of vision. AMD directly affects the macula, or the part of the retina responsible for central, detailed vision. In most sufferers, the change is so gradual that it’s not even noticed until permanent damage has already been done. Make sure to schedule consistent eye exams as you get older to prevent the progression of this disease.

BMI, again regardless of other factors such as smoking, does seem to drive up relative risk of contracting AMD. Oxidative stress corresponds with increased BMI, suggesting yet another connection between obesity and AMD. In any case, unhealthy weight appears to both encourage developing AMD and worsen the progression of existing cases.

Keeping at a normal body weight is an important goal, no matter what aspect of health you’re concerned with. Exercise can obviously help and might have some other positive affects you wouldn’t expect. Getting up and running seems to have effects on the eyes beyond just keeping your weight down.

Whatever the case, stay active. And while you’re at it, take a good look at what you’re eating. There are many foods that are great for your general health and your vision, you just have to make the change. Eye vitamins also cut your odds of experiencing some common eye disorders like near- and farsightedness, astigmatism and presbyopia. We hope you now have a better understanding of the connection between your weight and your eyes.