Raise your hand if you’ve ever been on a diet. It could have been to lose weight, to feel younger, or to reduce blood pressure. You are what you eat, as the saying goes, and in terms of health, it couldn’t be truer. But, you probably haven’t dieted for your eyes.

In the big world of nutrition, eyesight is often left behind by more mainstream concerns, such as weight loss or maintaining healthy cholesterol levels. But that doesn’t mean your eyes don’t feel the effects of diet – just the opposite, really. Your eyes are delicate organs and require a mix of nutrients to function optimally. Vitamin B12 is among them, though researchers are still learning more about its exact role in keeping the eyes healthy. 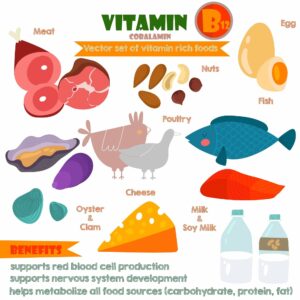 The Basics of B12

Chemically, vitamin B12 is a big, complex molecule. So much so that it’s currently impossible to synthesize without the help of bacteria. As very few living organisms (only certain bacteria as well as other single-celled life called archaea) produce it naturally, humans have to get their fair share through diet.

Fortunately, B12 can be found in most animal products. Seafood, particularly shellfish, is an excellent source of B12, as are dairy products and eggs. Liver is a little off the beaten dietary path for some, but it’s an incredible source of many vitamins, including B12.

For people who aren’t so eager to turn to the above options, getting sufficient amounts of B12 can be difficult. Vegans can take advantage of a wide range of B12 fortified products. You may never have thought about the “vitamin fortified” label on your grain products before, but they are actually important! Cereal, health bars, and yeast are all available in B12 fortified forms. However, the actual amount of vitamin B12 in these foods varies and may not be enough for everyone. As a result, vegetarians and vegans are generally advised to take B12 supplements on top of their regular diet.

Effects of B12 on the Body

A solid B12 supply is crucial to having a well-oiled nervous system, as well as the creation of new blood cells. An untreated deficiency can wreak havoc on the body, eventually causing severe, irreversible damage.

Weakness, pale pallor, and light-headedness are all early symptoms. These can progress to bleeding and bruising issues, as well as stomach and intestinal difficulties. Without vitamin B12, the sheaths around nerves also become damage-prone; in severe cases, neurological symptoms will eventually appear, including poor memory, difficulty thinking and concentrating, and even personality changes.

Of course, as with most vitamins, it’s possible to have too much of a good thing. Still, it’s unlikely that you’ll consume excessive amounts of B12 and experience side effects – it’s virtually impossible to do so with dietary sources, and even most supplements aren’t going to put you in the danger zone.

People with certain disorders, including gout and megaloblastic anemia, should be extra cautious when considering B12 supplements, as they may be more sensitive to supplements. In an otherwise healthy body, excess B12 supplements can cause nausea, raised blood pressure, and various skin problems. More worrisome, though less conclusive, is that tenuous links between certain cancers and B12 supplementation do exist. So, don’t take more B12 than directed, and as always, consult your physician before you embark on a supplement regimen.

Effects of B12 on Vision

We’re still far from understanding what parts of the visual system require B12, but recent studies have started to shed light on several ocular uses of the vitamin.

Age-related macular degeneration (AMD) is an enormous and increasing problem for older individuals. The disease results from either a buildup of deposits at the back of the eye or the growth of abnormal blood vessels. In both cases, sufferers lose significant portions of the central vision.

While prevention can go a long way toward stopping the progression of the disease, actually diagnosing a case of AMD isn’t easy, given how subtly it advances. While there’s no cure for AMD, there does appear to be a dietary means of slowing it down. Eating foods rich in vitamin B12, like broccoli, has proven to help slow the progression of AMD.

Optic neuropathy is among the rarer effects of B12 deficiency, but still poses a considerable threat to the eyes. The optic nerve is responsible for carrying signals from the eyes to the brain; without it, even a patient with otherwise healthy eyes could lose vision. B12 deficiency can render nerves, including the optic nerve, to become brittle. It can cause damage to the optic nerve resulting in decreased central vision. It is possible that with proper B12 supplementation, sufferers may be able to reverse the effects of this condition.

Vitamin B12 and You

So, should you be concerned about B12 deficiency? It’s actually a tricky question to answer. Younger readers with diverse diets should be getting sufficient levels from their diet without any supplementation. However, anyone following a vegetarian or vegan diet should absolutely take care to get their recommended dosage. Remember, a varied diet is the best way to build better vision.

People over 50 should also be on guard. The body’s ability to absorb vitamin B12 from animal sources declines with age. However, most fortified foods and supplements should still be effective.

If you do need to supplement, the next question is: what sort of supplement should you take? Several forms are available and you’re likely to see liquids, pills, sublingual supplements, sprays, and even injections. However, most people should avoid injections unless they’re at a hospital – injections are largely unnecessary, not to mention difficult to self-administer.

Most oral forms should be fine, as long as you get them from a reliable source like the Rebuild Your Vision Ocu-Plus Multivitamin. The most important thing is that you find a way to get enough vitamin B12 for the health of your eyes. The more you think about your vitamin supplementation earlier in life, the better your vision will be when you are older. So, make sure you add enough B12 sources to your next grocery haul. Your future eyes will thank you!