It’s no secret that vision generally deteriorates with age. This can be due to a variety of reasons, from straining your eyes through overuse to genetic abnormalities. One of these issues is age-related macular degeneration (AMD), a disease that causes vision problems and blindness associated with people over the age of 50. Many people may put off worrying about issues like AMD until they are older, and new research is showing that this is not a wise decision. Diagnoses of AMD are on track to increase exponentially in the next few decades, even in younger populations.

According to data recently published by the National Eye Institute, just over two million people were affected by AMD in 2010. By 2030, that number is supposed to jump to over 3.5 million. AMD will affect 5.5 million people by 2050. These numbers are especially shocking because between 2000 and 2010, the number of cases only increased by fewer than 300,000. So why the sudden jump in projected diagnoses?

This jarring increase may be partly due to improving methods for screening for the disease. The projected numbers have also caused AMD to become a more well-known issue, leading people to go in for screening at a younger age as well.

Whatever the cause, it is clear that AMD is starting to be found in younger populations. 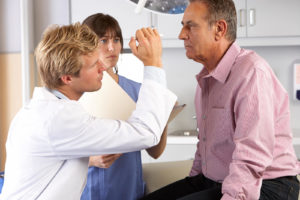 Everyone knows how important it is to remain up to date with your eye exams. In light of the increasing number of AMD cases, regular trips to the optometrist are even more important. Taking care of your eyes and preventing this disease can begin as early as childhood.

In many cases, age-related macular degeneration is not discovered in individuals until the disease has progressed to the later stages. This makes the disease much more difficult to treat.

This is partly because most screenings for the disease don’t start until age 50. It’s also because the disease progresses slowly and often without symptoms until it has reached the late stages. One more reason why it may not be discovered early is because many people don’t schedule regular yearly eye exams.

Doctors and researchers used to believe that age and genetics played the biggest roles in the development of AMD. However, it seems that age may not be such a big factor in the cause of AMD.

In its very early stages of AMD, most people don’t even know that anything is wrong. However, as the disease begins to progress, individuals will experience changes in their vision such as blurriness, spots or shadowy areas, or even distorted vision. Complete vision loss can occur if the disease is not detected early enough. This is why regular eye exams are so important.

Although the symptoms begin to appear as AMD progresses, some people choose to ignore them for one reason or another. Others schedule a visit to see their eye doctor the minute they notice something is wrong with their eyesight. Patients who go to their doctor as soon as they notice symptoms will achieve diagnosis early on. However, this often isn’t soon enough to completely prevent the disease.

Even with the increase in cases of AMD, people experiences symptoms may avoid going in for a screening because they don’t know what to expect. After all, even an annual eye exam can be uncomfortable.

However, getting screened for AMD is pretty similar to going in for your annual eye exam. Here are some of the ways your eye doctor might screen for AMD:

The Autofluorescence scan is a technique that allows eye care professionals to take photos of the patient’s retinas. This allows doctors to measure the amount of dead retinal cells in your eyes, which is an indicator of dry AMD.

Just like your typical eye exam, your doctor may dilate your eyes to scan for AMD. Dilation enables doctors to view the back of the retina and search for optic nerve damage. They will often then perform a fundoscopy, which essentially entails aiming a bright beam of light at the back of the eye to look for signs of AMD.

This type of eye exam is the least invasive of the three. It allows your doctor to take cross-sectional images of the retina and measure areas where it may be thinning, which is an indicator of AMD.

Unfortunately, there is no cure for age-related macular degeneration. However, there are some treatments that can delay the progression of the disease and sometimes improve one’s vision. The options available depend on both the stage and form of the disease the patient has.

If the individual has the wet form of the disease, some FDA-approved drugs can stop the growth of abnormal blood vessels and slow the disease down. Some of these drugs help to improve vision as well.

If doctors diagnose a patient with the dry form of the disease, there are no FDA-approved methods of treatment available as of yet. However, following a nutritional diet may help to prevent the disease from progressing to the wet form.

In fact, studies continue to investigate whether or not a nutritional diet can lower the risk of developing the disease. Many of these studies have shown that there is a link between nutrition and lowering the risk of AMD.

Eating a diet that is high in omega-3 fatty acids may lower the risk of the development of AMD and possibly prevent the disease entirely. Foods high in omega-3s include salmon and other kinds of fish. In addition, nutrients like zeaxanthin and lutein are also helpful for preventing AMD.

When in doubt, take an eye-healthy supplement, like our Ocu-Plus Formula, which contains the 17 essential vitamins and minerals for good eye health. It may help to lower the risk of developing age-related macular degeneration as well as many other diseases that affect the eyes and vision. While it may not be possible to completely prevent AMD, taking care of your eyes at any stage of life can certainly help.