Find out about what’s happening in the world of vision technology. From new studies and research to high tech gadgets and video games that help improve vision, these articles will keep you up to date. 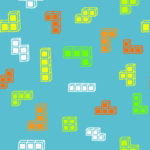 I’m sure you all know the amazing video game, Tetris. Who hasn’t spent many an hour flipping and spinning blocks to complete puzzle after puzzle? Since its debut in the early 1980s, the game has formed an almost cult-like following. Who knew that a computerized game in which the player spliced together falling bricks would […]