Deny it all you like, but we’re all getting older. While you may be able to convince casual acquaintances and dating websites that you’re eternally 29, you won’t be able to fool your eyes. While you’ll undoubtedly have friends who can maintain their 20/20 vision well beyond regular years (or claim that they can), most of us are going to encounter some vision problems as we age. 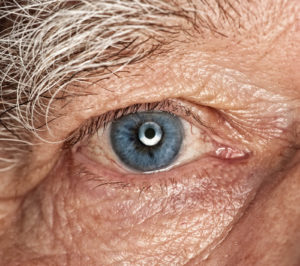 Don’t despair. Mature eyes undeniably come with some caveats, but there are plenty of reasons to remain hopeful. If caught in time, most of the vision disorders we’ll be talking about below have decent prognoses, and a couple even have high-percentage cures. That said, it’s important to keep a proverbial eye on your eyes. Read on, and we’ll cover a few of the biggest threats to aging eyes.

The first entry on our list is almost certainly the most common. Presbyopia quite literally means “elder eye”, and my does it affect elder eyes – estimates on the prevalence of presbyopia range, but most agree that over half of older individuals will experience it to some extent. The most obvious effect, and the easiest one to look out for, is a loss of ability to focus on nearby objects, especially in dim light. Ever seen a friend holding a menu at arm’s length and squinting just to figure out what she wants to eat? You’ve seen presbyopia in action. If you do catch yourself straining to read fine print, then you’re likely starting to feel the effects yourself.

Don’t panic! There’s plenty you can do to fight presbyopia. The most common and perhaps easiest thing to do is get yourself a pair of quality reading glasses, but then your stuck with those glasses from then on. You could resort to laser eye surgery to eliminate the need for glasses, but of course there’s always a risk involved with eye surgery. The best method to prevent presbyopia is with eye strengthening vitamins.

Another very prevalent age-related problem. Cataracts occur as proteins in the eye denature over time, rendering the lens of an eye more opaque and less able to perceive light properly. Cataracts some in a few different flavors, with a few different symptoms. Several types do predictably cause a reduction in vision, and cause particular difficulties when driving, reading, identifying faces, or viewing contrasting colors. Major difficulties with glare can also signal the presence of another type of cataract. If left untreated all varieties can seriously impair vision, even to the point of blindness.

Fortunately, treatment is relatively straightforward. Cataracts are removed surgically, a process that has become one of the most common elective surgeries in America. It’s so routine, in fact, that it’s usually performed as an outpatient procedure. Surgery is also remarkably effective, and the vast majority of patients report dramatic improvements in vision.

Well, we’re moving on to some scarier stuff. Glaucoma is characterized by a dangerous increase of intraocular (liquids inside the eye) pressure. It comes in two distinct subtypes. Closed-angle glaucoma appears suddenly and often very, very painfully. While unpleasant, it does have the positive effect of driving sufferers directly to a doctor’s office before major damage occurs. Open-angle glaucoma is vastly more common and has a slower buildup, but may pose even greater danger to the eyes, as untreated glaucoma can cause irreversible damage nerves in the eye, giving it the dramatic nickname of “the silent thief of sight.”

Not only that, but glaucoma isn’t exactly uncommon. As many as 10 percent of older Americans may suffer from the condition. So what’s there to watch out for? In the case of closed-angle glaucoma – or an acute episode of open-angle – eye pain is a major, hard-to-ignore sign. Nausea, seeing halos around light sources, and suddenly decreased vision are also signs.

Anyone experiencing these symptoms should seek help immediately, as a closed-angle case can cause permanent damage very, very quickly. Open-angle is much harder to catch, and the only sign is often a gradual loss of peripheral vision. Anyone concerned about glaucoma, particularly anyone with a family history of the condition, should make consistent appointments with an eye doctor to keep a case from progressing undetected. If you do wind up with a case, there’s some good news. A wide range of behavioral, pharmaceutical, and surgical interventions do exist.

Some more good news: if you’re reading this article, you’re already in the right spot to start taking control of your eye health. Rebuild Your Vision’s Ocu-Plus Formula consists of 17 vision boosting vitamins and minerals. Together, they’ve made a difference for many people suffering from aging eyes.

Presbyopia in particular benefits from the Ocu-Plus Formula. Certain eye vitamins have been shown to make a major difference for presbyopes. Other, more serious conditions, such as glaucoma, certainly should have you running to an eye doctor before you turn to home therapy, but once you do, the Ocu-Plus Formula can provide you with the best start to treatment possible by keeping your eyes healthy and well supplied with every nutrient they need.