Home > Food For Your Eyes > Can the Occasional Drink Make Your Eyes Stronger?

We’re always looking for new ways to boost our eye health and watching out for lifestyle habits that can impact our vision. And when a new study emerges that proves one of our “bad habits” is actually good for us, then that’s cause for celebration! It’s a little known fact that the occasional glass of red wine is good for the heart, but what else is an occasional drink good for? Could it work to improve the strength of our eyes as well?

Research says that this strange concept might actually be possible. Studies have indicated that partaking in occasional drinking could help to slow down vision loss as we age. Let’s look a bit further into this concept, and at what visual decline and visual impairment actually are.

What Is Visual Impairment and Visual Decline?

Visual impairment is quite a serious diagnosis. It means that you have an eye condition which has caused some loss of vision. Visual impairment can be caused by a disease of the eye. It can also be the result of illness in the body which has affected the eyes (such as diabetes), or an eye injury. Doctors cannot use corrective lenses to correct the visually impaired’s eyesight.

Visual decline is different to visual impairment. In this situation your vision declines or decreases. The rate of decline varies from person to person, so it can be quick or slow. You might go from having perfect eyesight to having severe degeneration in the eyes in a short amount of time. This affects your visual acuity and can make everyday life a lot harder. Tasks like reading or driving become a lot harder with poor vision.

The Prognosis for Occasional Drinking and Your Eyes 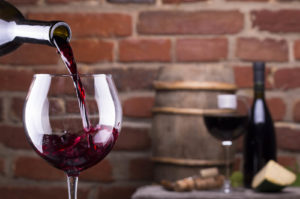 There has been some research to show that people who drink the occasional glass of wine develop visual impairment issues at a lower rate than non-drinkers. The problem is that researchers aren’t sure whether the occasional drink is the cause of fewer visual problems, or if it’s just coincidental.

An NHS study in the UK that surveyed nearly 50,000 people found that those who consumed 14 units of alcohol per week were less likely to need cataract surgery later in life. A glass of wine is equivalent to two units of alcohol. The study found that those who drank only wine decreased their risks of developing cataracts by 23 percent, while those who drank beer or spirits decreased their risk by 14 percent.

Alcohol frequently gets a bad rap for causing general health problems, as well as visual impairment issues. Now it seems that alcohol might actually be beneficial for eye health. With that said, alcohol still has links to lots of health problems if you drink too much. Moderation is the key when it comes to drinking.

The CDC recommends one unit a day for women, or two for men. Many health professionals recommend limiting your intake even more. They would recommend that you stick to occasional drinking, which is defined as less than three units per week.

Although more research is needed to confirm that alcohol can help your eye health, it isn’t needed to tell us that excessive drinking will damage your health and your eyes.

Dr. Sharon Chua, who was the first author of the paper in question, posits that the reason wine drinkers decrease their risk of cataracts more than those who drink beer or spirits is that wine contains a lot of antioxidants. Cataracts occur when the cells in your eyes oxidize, so it makes sense that wine would help counteract this process!

Of course, the doctors who ran this study are not suggesting that people increase their alcohol intake just to preserve their eye health. Alcohol can damage your body in many ways, so it is important to drink in moderation. There are many other ways you can use nutrition to improve your eye health that don’t involve the risks of alcohol consumption. But, you can feel a little less guilty about enjoying a glass of wine with dinner!

According to the same study, heavy smokers and heavy drinkers were “somewhat” more likely than nondrinkers and/or nonsmokers to experience visual impairment. This reinforces that heavy drinking is bad for your health and that alcohol consumption should be limited.

What Does This Mean for Us?

Visual impairment issues are more common now than they ever have been. There are around four million Americans living with visual impairment. Experts expect this trend to continue,  predicting the number of sufferers will double by 2050. What does this tell you? Basically, you need to be proactive with looking after your eyes.

Occasional drinking, taking a vitamin supplement, eating right, getting exercise, limiting screen time, and protecting your eyes when you’re out in the sun are all areas you have control over. With this in mind, you can adjust your lifestyle choices and lower your chances of suffering with visual impairment.

What You Can Do

Interestingly, this same study also looked into the impact of physical exercise on eye health. Researchers found that two percent of people who engaged in physical activity three or more times a week experienced visual impairment. In comparison,6.7 percent of the inactive study participants experienced visual impairment. This is more than triple the rate of people who exercised regularly.

Keeping age-related visual decline in mind, the study concludes that individuals who exercise regularly are 58 percent less likely to experience visual decline as they age.

Another way to boost your eye health is by stocking up on vitamins and minerals. Vitamins A, C, and E are especially beneficial to the eye. Beta-carotene, zinc, and copper are among the most important minerals for your eyes. Make sure you eat plenty of antioxidants as well! Alpha lipoic acid has been touted as a super strength antioxidant, which serves to fight free-radical aging in both the body and the eyes.

Another lifestyle change you can make to protect your vision is to take a carefully formulated multivitamin, one which is specifically designed to help your eyes. You should also consider adding in at least three days of exercise each week.