Home > Interesting Vision Facts > How Bad Is It for Your Eyes to Watch Television in the Dark?

Since you were a little kid, you were probably told that it’s bad for your eyes to watch television in the dark. But, when you go to a movie theater, you can’t help but notice how nice it is to have all the lights turn off so you can really focus on the movie. So, many of us stop following that rule of keeping the lights on while we watch TV when we get older. But, can watching TV in the dark really damage your eyes, or is it just an old wives’ tale? And what about using other types of screens in the dark? The answer may be more complex than you think.

Unfortunately, watching TV in the dark can strain your eyes. When you are watching television in a dark room, your eyes must constantly adjust to the different lighting. You may think the light on the television stays the same, but it actually changes quite a bit. The various scenes and backgrounds of the show have different lighting levels. To prove this, try looking at the wall opposite of the television while a show’s on. You will see many flashes of lighting level changes happening in quick succession.

Every time the scenery on the screen changes or if the television show switches to a commercial, there can be a big change in the light emitted from the screen.

This constant changing level of light makes your eyes work harder, which results in eye strain. Eye strain can result in dry eye syndrome, which is a contributing factor to the development of glaucoma. 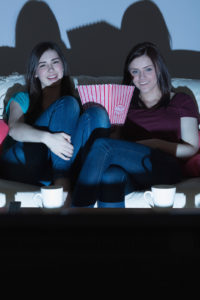 Eye researchers agree that eye strain can be reduced while watching television by lighting the area around the television. This lighting resulted in less visual discomfort, fatigue and a quicker response in brain waves from visual cues. This remedy is still recommended by experts today under the term “bias lighting.” Bias lighting smooths out the contrast between a bright screen and a dark room, thus reducing eye strain. You can even buy special bias lights to install behind your TV these days, which means you wouldn’t have to leave your lamps or recess lighting on while enjoying your favorite series!

Some of us (let’s be honest, many of us!) work on our computers in the dark too. It is probably more commonly done by teenagers than any other age group, but it happens to all of us more than it should.

Since computer monitors and television screens are now manufactured very similarly, users are at the same risk when using a computer in the dark as they are when they watch television in the dark. Eye strain is a growing problem among the younger generation who spend more and more time using the computer whether it be in the light or the dark. So, it’s important to invest in a good desk lamp and switch it on when you’re working on the computer, especially after the sun goes down. This will really cut down on any digital eye strain you could experience.

As children, we were also warned against reading in the dark. We were told that we would ruin our eyes forever. Today, more and more children read on e-readers or tablets. These devices can cause eye strain and dry eye syndrome because of the pixel quality and lighting levels. But, newer models allow for lighting and contrast adjustment, which makes them slightly easier on the eyes.

If you want to read from a book or e-reader, make sure there is a secondary light source or bias lighting. If you don’t want it bright, it can be a softly lit background light. It just needs to be strong enough to keep your eyes from straining to see the text on the screen.

Eye strain is often thought of as something that is temporary. So, most people think that their eyes will hurt for a while, but after they rest them, everything will go back to normal. In the short term, this is usually correct. Unfortunately, prolonged eye strain has been associated with glaucoma and astigmatism.

You should listen to your eyes! I know that sounded funny, didn’t it? Our eyes don’t talk, but they do give us clues that something is not right.  Some symptoms that you are straining your eyes include the following:

If you experience any of these symptoms, take them seriously. You don’t have to surrender to suffering from eye strain.

Steps to Save Your Eyesight

The best ways to ensure you keep your eyesight healthy when watching television and using the computer at night is to keep at least a small amount of light on. Low-level lighting, like bias lighting, can reduce eye strain. Be aware of where the lighting sources are set in relation to the screen. Otherwise, they can create a glare on the screen which increases the risk of eye strain instead of reducing it.

Give your eyes a break from the electronic devices. If you are watching a movie, look away from the screen every 30 minutes. Take a couple of minutes to look around the room, scan it. Do not focus on any single object, as this is making your eyes work when your goal is to let them rest. Or, close your eyes for a minute to allow them to get that bit of rest. These and other eye exercises will help prevent eye strain.

Make sure you are blinking often. If you are working on a computer or on an e-reader, take frequent breaks. Our 10-10-10 rule is a great one to follow. Also, make sure you are sitting far enough away from the television and computer screen.

You can also try eye vitamins to reduce eye strain and strengthen your eyes. Eye vitamins, like the ones found in the Ocu-Plus Formula, really make a difference in strengthening your eyes, and therefore your vision. Just like any other muscle in your body, you need to take care of the muscles around the eyes. Keep them healthy and strong and you’ll find your eyes won’t get tired as fast or easily!