It’s probably not controversial to call early childhood an important, formative period. After all, it’s where we develop the basis of our personalities and habits, our likes and our dislikes, and even lay the foundation of good or poor health.

Eyesight is also subject to change very early on in a child’s life. Over the course of our first several years, our vision rapidly develops and refines, taking us from fuzzy, largely light-based vision as infants to the complex visual system we enjoy as adults.

Unfortunately, even as these gains occur, problems can crop up as well. Our behavior as children has a major, lasting impact on how well we grow into our eyes. For parents, this means that learning the basics of visual health can make the difference between shelling out for glasses when a child turns 12 and, well, not shelling out. If you’re concerned about your offspring’s eyes, keep these simple tips in mind.

This is the single most important piece of advice you’ll see in this entire article. Sedentary lifestyles are becoming more and more common among children in developed countries, and they’re absolutely ruinous to eyes.

We’ll get into some more specifics later, but even if your kids only go outside to play with their smartphones, they’ll still be receiving some benefit, thanks to the effects of natural light. An extremely large body of research has proven the point in recent years: outside light helps prevent nearsightedness. 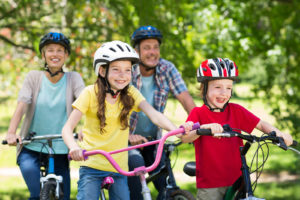 And the effect is surprisingly dramatic. A recent study on the subject concluded that each additional hour spent outside per week dropped a child’s chances of becoming nearsighted by two percent. Ideally, parents should aim to have their kids spend time outside for up to 15 hours per week.

Tip two goes hand-in-hand with tip one. Once you’ve won the first battle of getting your kids into the great outdoors, it’s time to get them running around in it. Exercise is one of the best ways to keep kids from joining the increasing numbers of obese and overweight children. Not to mention, a great way to keep their eyes healthy as well, as weight problems can have some vicious effects on eyesight.

Retinopathy, either diabetic, or linked to high-blood pressure, is the primary danger. In both cases, tiny blood vessels in the eye are damaged, either by years of unhealthy blood pressure, or by the spikes in blood sugar experienced by diabetics.

Either way, obesity is a risk factor. If left untreated, retinopathy can cause extensive scarring inside the eye, eventually causing permanent vision loss or even total blindness. Encourage exercise, though, and you’ll be setting your child up for a more active, healthy life, and better vision as they age.

Here’s one that parents have been struggling with for most of recorded history. Like adults, children tend to gravitate to food high in sugar, salt, and fat. Unlike adults, they don’t have a perfect understanding of why they should avoid it. In fact, they are more than willing to scream themselves blue in order to get it.

Anyone responsible for raising a child probably knows how difficult it can be to keep healthy food in their diet. Greens and other beneficial food groups often cost extra – a pretty tough sell if the recipient’s probably going to throw them against a wall.

Believe it or not though, the effort is worth it. Early diet habits tend to stick with people and getting kids accustomed to healthy foods can save their sight down the road.

Let’s look at cataracts and macular degeneration (AMD) for example. Both are extremely common, age-related visual diseases. Cataracts account for 55 percent of new cases of blindness worldwide. In recent years, researchers have found that both can be combated by diets rich in zeaxanthin and lutein. These are two molecules that are part of a group called “carotenoids” that can reduce some of the chemical stresses that cause AMD and cataracts. A major study found that these carotenoids played an important role in preventing the two diseases.

Fortunately for parents, you can commonly find the two in leafy greens, corn, egg yolks, and some grains. Teaching children to value, or even enjoy these foods can lower their risk for sight-stealing disorders in their later lives. It’s might also be a good idea to incorporate easy and convenient eye vitamins into the daily diet to really get a vision boost.

Vision screenings have become more and more prevalent in the American school system. And while that’s good, they also provide a false sense of security for parents concerned about their child’s visual well-being. Most of these tests strictly check for visual acuity, only one part of the visual health puzzle.

Children with accommodative disorders are particularly liable to slip through undetected. A surprisingly high percentage of children have strabismus, or crossed eyes. And while many cases will resolve as they age without intervention, others won’t. Strabismus can complicate a number of visual tasks, particularly reading. Headaches and eye strain are both natural consequences, and neither do much to enhance a student’s school experience.

Leaving this and similar disorders untreated can have serious effects on a child’s vision. However, if caught early, they’re relatively straightforward to treat. And in order to catch them early, your best bet is to turn to a professional.