We spend a lot of time at Rebuild Your Vision talking about the effects that poor vision can have on the day-to-day lives of older people. Presbyopia, glaucoma, cataracts, and AMD all are extremely common and severe eye disorders. They are much more likely to affect silver citizens than they are children. Sometimes though, visual problems can have an even greater impact on those young enough to still be developing physically. Not to mention the effect they can have on young people’s social development.

Tom Miller, M.A., recently gave a webcast analyzing the effects of visual impairment on social development for the Perkins School for the Blind. In this article, we’ll look through some of his findings and add in a couple of observations of our own.

One of the first facts that we must bring up when discussing childhood visual health is how incredibly common eye problems are for younger people. Sources say that 6.8 percent of American children younger than 18 have visual impairment from uncorrected visual disorders.

Believe it or not, this high number actually puts the US and Canada well ahead of many countries. China and India, in particular, have enormous rates of untreated vision problems. The percentage of children with these issues is a whopping 20-50 percent in China. Europe, on the other hand, tends to have incredibly low, single-digit rates, excepting Russia, which claims a 48 percent estimated rate. 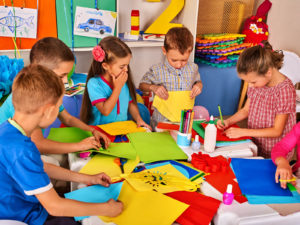 A primary reason for this – and one we have discussed before – is that childhood vision tests tend to be non-comprehensive. They are often run through schools with a nurse or similar professional acting as the point of care. And, they’re particularly apt to miss disorders that don’t necessarily affect visual acuity. Strabismus, or crossed eyes, and similar conditions won’t always impede a child’s ability to read a letter chart. They require specialized testing to catch.

The greatest danger of subpar testing is that it sets children up for a tough start to their academic careers. This can easily snowball into bigger problems. Poor grades in elementary school may not count for much, but the extreme difficulties that many children with low vision face only worsen as material becomes more advanced and reliant on previous learning.

Poor vision can be a nightmare for students trying to make their way in a heavily reading-oriented school system. Nearsightedness can make it impossible for a student to fully focus on a blackboard. Strabismus, in particular, is notorious for turning book assignments into headache-inducing crawls for affected children.

These and many other undiagnosed disorders can severely damage a child’s odds of academic success. Research from the Essilor Vision Foundation shows that children with sub-20/20 visual acuity were three times more likely to fail a grade than their peers. Children with visual disorders are also more likely to produce errors and mistakes in classwork and tests.

As you might guess, academic struggles don’t make life any easier for growing children and social development. Researchers have even worked to find a link between low vision and delinquency.

US researchers found that 70 percent of first-time offenders had vision problems of some sort. However, it’s worth noting that there’s plenty of controversy surrounding this particular topic.

Whether or not you believe that an undiagnosed need for glasses can give rise to criminal behavior, the rest of the evidence is unsurprisingly clear. Kids with poor vision often struggle to make their way through school.

A few of the emotional and social difficulties detailed in Miller’s talk are tied to academic performance. But that’s not quite the whole story. Another key metric of social success is (even if it’s a bit soulless) career success. Children with low vision tend to struggle in this category as well.

Also worth noting is how important vision is for early recognition of emotional cues. Facial expression is a key means of communicating mood or intent. Children with low vision may have difficulty recognizing fine detail crucial to establishing emotional context.

While there hasn’t been much research in this area involving children, at least one study has shown that adults with low vision can have difficulty picking up on facial expressions.

A 2018 study out of Australia showed that adults suffering from age-related macular degeneration were less likely than a control group to notice the expression on a face. Interestingly enough, when they did notice an expression, they generally categorized it correctly.

Again, adults with AMD aren’t exactly analogous to children. However, it’s not hard to imagine some of the same difficulties making delicate social interactions tricky for a growing child. Especially given how reliant extremely young children with limited vocabularies are on non-verbal cues.

As anyone who grew up with low vision can testify, poor eyesight can make sports much more difficult than they might otherwise be.

You’ll find plenty of empirical sources discussing this. Traditional recreational activities aren’t designed with low vision in mind, and children with undiagnosed social development difficulties can quickly find themselves frustrated and several steps behind their peers.

With a diagnosis comes some more concrete steps. Betsy Zaborowski, an executive director at the National Institute for the Blind, has emphasized the importance of recreation and sports for blind children, or those with low vision.

Zaborowski specifically recommends “Karate, judo, swimming, and wrestling” as options suited to children dealing with low vision. Whatever the case may be, the message is constant. Children need activities and those with poor eyesight often have to search to find one that they can excel in. Finding it can be a struggle, but options exist and are well worth the trouble to join.

It’s also highly recommended to get regular eye exams for infants, children, and adults. They’re crucial for treating correctable errors and detecting diseases. Children with healthy and normal vision should have eye exams every two years. Those with refractive errors should see their eye doctor annually.

If you’re curious about how visual impairment may affect your child’s social development, Miller’s webcast is a must-watch. You can find out more about how to help foster healthy social development for your child experiencing vision issues, which will set them up for success in multiple ways later in life. As always, there is a lot you can do to improve your vision over time!