Home > Vision Conditions and Diseases > Nearsightedness > Why Are More People Nearsighted Than Ever Before?

Our bodies are strange and complex things. We find a way to cure one ailment, and just as quickly, a new one begins affecting mass populations. A relatively new eye condition that seems to be on the rise with no signs of slowing down is myopia. This condition is also known more colloquially as becoming nearsighted.

What is most puzzling aspect of this recent nearsightedness boom is not the quick rise, but rather why this quick rise is happening. Scarce amounts of information exist on this topic. There are a lot more theories out there than solid facts as to why more and more of us are becoming nearsighted.

However this isn’t a sign for panic. In fact, more researchers have joined the ranks to study this new myopic phenomenon. As they get hard at work to find us answers, we’ll tell you what they’ve found so far.

Myopia and How It Develops

Simply put, myopia is the ability to see objects close to the eye very well. This is why it is sometimes referred to as nearsightedness. Reading and computer use are a breeze, but seeing objects further away, such as road signs may prove to be more difficult.

Myopia develops when the eyeball is too long compared to the focusing ability of the cornea and lens is when seeing things in the distance becomes difficult. Because of this, rays of light are focused at a certain spot in front of the retina instead of directly on its surface. Myopia can also be caused by the cornea and lens being too curved for the eye.

Though myopia normally develops during childhood when the eye is still forming and growing, it stabilizes in early adulthood. However, sometimes the condition can continue to progress throughout a person’s life. As we’ve mentioned before, as the world population continues to age, so does the rate of eye issues like myopia. The National Eye Institute predicts that nearsightedness diagnoses will rise dramatically between 2030 and 2050.

For the most part, people can correct nearsightedness with prescription glasses or contact lenses. But natural, healthier remedies also exist.

Why Are More People Becoming Nearsighted? 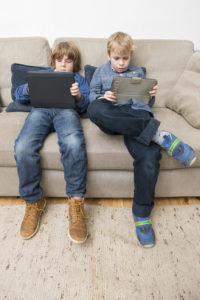 That’s the million-dollar question, isn’t it? With myopia affecting more people than ever before, everyone wants to know how and why it’s happening? We may not be able to give any concrete answers at the moment, but we’ll gladly report on the headway, because yes headway is being made, by researchers and how they’re doing it.

The main reason attributed to this jarring surge of nearsightedness seems to be our lack of time spent outdoors. By spending less time outside we spend more time inside, working on activities that require a near sense of vision such as reading, watching television and using digital devices.

The eyes continue developing in children until finally stabilizing in young adulthood. Being outdoors during this time of growth isn’t just about physical and mental well-being; it’s about making sure our children’s eyes are getting the right exposure.

If activities that happen near the eye are the only activities being carried out by developing eyes, it comes as no surprise that nearsightedness should develop. Being outside and playing catch or going for a bike ride will help your child’s eyes develop to be able to perceive items in the distance.

This lack of farsighted activity is not the only thing preventing the eyes to develop properly. Studies have suggested that the light from the sun may play a role in developing the eyes and preventing them from growing too long.

An experiment to explore the development of the brain’s visual system in monkeys was also the accidental discovery of how myopia may develop due to lack of light. In a now seemingly very controversial method, neuroscientists in the 1970s would sew one eye shut in newborn monkeys. This led them to realize that the lack of light gravely affected the eye’s growth.

No doubt, sewing an eye shut was bound do have repercussions on the monkey’s visual health. Eyes in humans and monkeys alike, know when to cease growing when the retina comes into focus. If no light is entering the eye, the eye can never see a clear image making it impossible for the retina to ever focus. Then the eye overgrows.

In chickens, it was found that induced myopia could be reversed by being exposed to bright light. A revelation, other researchers then found that light was an activation source for dopamine, which prevented eyes from growing too much.

This is where we hit a snag. As seen with the monkeys and chickens, their myopia was thrust upon them, but in children it develops naturally. What needs to be understood is what is causing the brain to signal the eye to keep growing? Sewing an eye shut is an extreme case of lack of light, but of course, no child is exposed to so little light.

So the cure to this imminent rise in myopia is not as cut and dry as many of us thought. However, there is a way you can prevent your children from facilitating the development of nearsightedness.

Experts suggest that children get at least three hours of sunlight a day. This is probably the most fun anyone will have preventing an eye condition. It isn’t a guaranteed method to prevent myopia from developing, but it’ll promote healthy eye development nonetheless.

You can also add eye-healthy foods to your diet to (hopefully) prevent yourself from becoming nearsighted. Some examples of this are foods high in carotenoids, like bright orange fruits and vegetables or leafy greens. You can also dabble in some eye exercises to strengthen your eye muscles and improve your eyesight. You can also try some eye vitamins to help with myopia.

Myopia is on the rise all over the world, but this is no need to panic. Scientists are getting closer to finding a cure than they are identifying the root cause of myopia. It may not be ideal, but hey, we’ll take it.