Most of us would agree that the state of health care today is much better than it was a few decades ago. Since then, we’ve made huge strides forward. There have been major breakthroughs in the fields of genetics, vaccinations, and medication. But while the overall picture brightens, some small spots still have problems. One of those problems is the connection between digital devices and nearsightedness.

Myopia, also known as nearsightedness, is one of those spots. Americans have seen a huge surge in diagnoses of myopia over the last 50 years. It’s believed that over 40 percent of the population already has myopia and that this will grow to 50 percent by 2050.

Why are so many people affected? What has changed to cause this spike in eye problems? 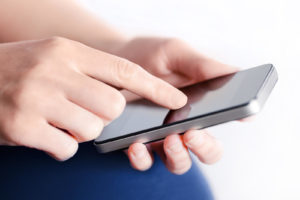 Here’s a hint – the answer is right in front of you. Whether it’s perched on a desk or cradled in your hands, you are reading this very article on a digital screen. Laptops, smartphones, and tablets – they’re all more popular than ever. Digital devices may also be one of the main factors behind the surging rates of nearsightedness.

Myopia, often called nearsightedness, happens when your eye can’t properly focus the light entering it. Light entering a normal eye is focused on the retina, a light-sensitive membrane on the back of the eye. The retina then sends signals to the brain, which forms the picture we see.

In a nearsighted eye, the system becomes little out of whack, as light is focused on a point in front of the retina. By the time it reaches the retina, it’s out of focus. The result is vision that, although fairly good at short distances, gets blurry when trying to see something further afield.

Nearsightedness has a few different causes. In most people, it’s caused by an eye that is physically too long. The eyeball should ideally be close to a perfect sphere. The shape affects how the eye focuses light, so a misshapen eye gives rise to myopia. A wide range of genetic and environmental factors (including work) can also contribute to the condition. Other forms of myopia can be caused by infection, surgery, or exposure to harmful chemicals.

Myopia is extremely common and, when diagnosed, many people just accept it as part of their life. However, it doesn’t have to be that way. Nearsightedness is a treatable condition. Glasses or contact lenses are the norm, but they can be expensive and generally mean a life sentence. Fortunately, they aren’t the only option. The easiest, safest and most natural way to treat nearsightedness is with vitamins and minerals designed to heal and restore vision.

Before it gets to the treatment stage, there are ways in which you can prevent nearsightedness. In medicine, prevention is always better than cure. The best single way to prevent eye problems, especially myopia, is to cut down on screen time.

One of the first things we need to discuss is the sheer amount of time we spend on screens. Recent statistics estimate the average adult spends around 12 hours a day looking at some type of screen.

Children do slightly better, clocking in at seven hours, but that’s still a lot higher than recommended. No matter how you view those numbers, they’re incredibly high and are likely to keep rising. Even schools are increasingly making use of tablets and laptops to teach children.

With that in mind, it’s less than shocking that our use of laptops, phones, and tablets is having major effects on our health. The much-publicized American obesity epidemic is at least partly caused by the modern sedentary lifestyle. People are less active than before and more tech-reliant than ever. The heavy use of digital devices has been drawing more and more attention, and has also been linked to a drop in sleep quality.

Use of digital devices can cause eye problems, including nearsightedness, for pretty much anybody. People who spend too much time staring at a laptop often develop Computer Vision Syndrome. CVS is characterized by dry, itchy eyes, and strained ocular muscles. However, the problem gets worse when we’re talking about children. Children are still developing physically, so extra strain or damage to their systems will have bigger effects.

Kids aren’t born with fully developed vision – instead, vision is something that develops through early and middle childhood. If many of those formative years are spent staring at a screen, a child is training their eyes to focus on a near-field object. Over time, it’s possible to lose part of their ability to stop focusing on near-field objects, leaving them with permanently near-focused eyes.

The recent trend of mobile computing hasn’t exactly helped. While focusing on a television may have caused earlier generations eye trouble, smartphones and tablets have introduced new variables. First, they’re portable. Activities and times that might have normally made screen time impossible are now easily filled with it – for example, riding a bus to school.

Phones and tablets also tend to be held much closer to the face than other screens, exacerbating the near-field focus issues. Added to this is the small size of portable screens, which means more strain on the eyes to focus and determine the details.

Making the problem even worse is that children now spend a lot less time outdoors than they used to. Outdoor play has been linked to positive eye development and a reduced chance of myopia. Having less of it means our children have worse vision overall than past generations, even without the consideration of screens.

How to Help Our Children

If you’re concerned about a child in your life, there are some steps you can take to help stave off myopia. The first, and likely the most important, should surprise no one: reduce screen time.

Current guidelines state that children younger than two should be exposed to screens as little as possible. Even older children should be limited to two hours per day (adults can also take a cue from this).

Another common sense fix is to kick tablet-transfixed kids outdoors. Along with reducing screen time, exercise helps development of the visual system and the body as a whole.

We’ve long been told about the benefits exercise can bring to us. A healthier immune system and better developed system is also more resilient to eye issues. Lower chances of other illnesses and infections loop back into this, giving you an even stronger visual system. Many studies have also linked sunlight to being beneficial for your health, both overall and eye specific.

With all of this in mind, it should be a no-brainer to limit your screen time. Even if you already suffer from nearsightedness, you can stop it from getting worse by changing how you uses digital devices. This can slow, or even stop, the progression of myopia. With the right combination of treatment, some people do see improvements in their vision.