Most people know about the classic, addicting video game, Tetris. Who hasn’t spent many an hour flipping and spinning blocks to complete puzzle after puzzle? Since its debut in the early 1980s, the game has formed an almost cult-like following. Who knew that a computerized game in which the player spliced together falling bricks would take off like it did?

Today, we live in the age of HD graphics and 3-D video games. Yet, kids all around the world still enjoy an old-fashioned game of Tetris every once in a while. And now, by playing a simple game, they could even be improving their eyesight. There’s actual research that proves playing Tetris could treat lazy eye.

Researchers from the McGill University Health Center studied the health effects of Tetris. They claimed that playing the popular video game could be an effective treatment for amblyopia. 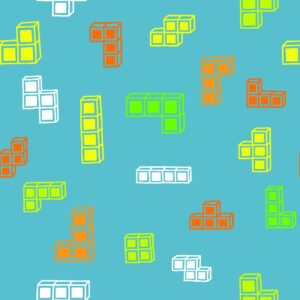 Amblyopia is commonly known as a lazy eye, and before now, often needed surgery to be corrected. People who suffer from the disorder also suffer from impaired vision due to a reduction of their visual field. For this reason and for aesthetic reasons, most sufferers look for viable treatment options that will fit into their lifestyle. While surgery is a viable option, most people dread going under the knife. Plus, who wouldn’t rather play Tetris than have surgery?

The scientists cited that Tetris was a viable treatment option because it requires visual information to be sent to both eyes simultaneously. In turn, the patient’s eyes learn to work cooperatively, and the weaker, lazier eye will learn to adjust and open wider. This is also due in part to the level of plasticity in the brain.

During a fierce session of Tetris, the neurons in your brain are firing rapidly! This rapid fire allows the brain to relearn how to utilize the lazy eye too. And in turn, retrain the eye to stay open wider for longer periods of time.

In the laboratory setting, scientists found that patients who played Tetris for only 15 minutes had improved vision in their lazy eye for 30 minutes after the game was finished.

During the study, as the game was played, the patient’s eyes had to learn to work together and cooperate with each other. Patients who played the game for 15 minutes per day dichoptically saw an overall improvement in their lazy eye’s vision within two weeks!

One issue with this study though was that it claimed that only adults and older children would benefit from the treatment. Small children didn’t test well in the lab since their eyes and brains are still growing. To treat lazy eye in small children, most eye doctors simply put an eye patch on the stronger eye. The weaker eye will then retrain itself and will cure itself.

And, the good news is that Tetris isn’t just good for vision, it is therapeutic in other ways as well. Researchers have found Tetris to be an effective form of therapy for individuals suffering from post-traumatic stress disorder (PTSD).

This is great news for any video gamer. Who wouldn’t want to be told they have to play more video games in order to treat their condition?

What Can You Do Besides Playing Tetris?

Playing Tetris and other video games aren’t the only ways to treat amblyopia. You can mimic the treatment strategies from video games through vision therapy. Consider attending vision therapy sessions with a trained ophthalmologist to correct your lazy eye. In these sessions, they’ll guide you through different eye exercises that build the weaker eye’s strength. They will also train your eyes to work together.

If you don’t want to attend vision therapy, you can try some of these exercises at home. Whether you’re driving to work, on the bus, on the treadmill, or relaxing, you can exercise your eyes. Make vision therapy part of your daily routine and you’ll see an improvement in your amblyopia.

Here are some of the vision therapy exercises you can try:

You can find lots of different games, like Tetris, that are meant to strengthen your eyes. Browse the app store on your phone or iPad to find one that’s fun for you. One example is GamE-blyopia which has astounding reviews that claim it has helped treat players’ amblyopia!

Another great way to help your eyes is to take eye vitamins. Many people don’t think about their eyes when they take their daily multivitamin. But, your eyes are an important part of your overall health. Taking vision-enhancing vitamins can really make a difference in your overall eye health and sight.

Combining vitamins with vision therapy and getting enough rest should lead to an improvement in your vision. Don’t hesitate to see your eye doctor and ask them to refer you to a vision therapist. And, if you’re a true video gamer, start playing a few extra games of Tetris. Your eyes will thank you!