Home > Food For Your Eyes > All About Alpha-Lipoic Acid

Our Ocu-Plus Formula is a special supplement designed to support your vision. This formula is packed with eyesight-enhancing nutrients. But if you’ve taken one look at our ingredient list recently, your head might be spinning. There are a few ingredients on the list that even we at Rebuild Your Vision didn’t know about before starting the company. One of those ingredients is alpha-lipoic acid. Try saying that four times fast.

Alpha-lipoic acid is an essential nutrient to keep your eyes healthy and prevent diseases and vision conditions. Today, we’ll take a look at this Ocu-Plus Formula ingredient, how it improves vision, where it’s found, and the best ways to get it into your system.

Alpha-Lipoic Acid: What Is It?

So, what is this highly scientific-sounding acid? Don’t be fooled by the name: alpha-lipoic acid is actually just an antioxidant produced by the body. It is also found in every cell of the body and is essential to your overall health.

As an antioxidant, alpha-lipoic acid is used by the body to fight free radicals. You may have heard of the term “free radicals” before, on television or in your favorite fitness magazine, but they often offer little explanation as to what a free radical is. All we know is that they’re the antagonists in this story.

Knowing how free radicals and antioxidants (or alpha-lipoic acid) interact with each other is essential to understanding how they help your eyesight. And don’t worry; you don’t need to be a scientist to understand.

Free radicals form in the body when weak bonds split. The free radicals that result from this split try to attach themselves to another electron by attacking molecules. When this happens, the free radical will essentially steal the electron from whatever molecule is nearest.

At this point, the free radical has resolved its own issue. This may seem like a cause to celebrate! However, in the process of taking on molecule’s electron, the free radical subsequently formed another one. When one free radical disappears, another one appears. This sets off a chain reaction that, if left to grow, can cause the damage and death of entire cells.

Alpha-Lipoic Acid and Your Eyes

This powerful antioxidant is a driving force behind keeping your eyes healthy as they age. Alpha-lipoic acid will prevent age-related eye conditions and can even reverse damage caused by diseases like diabetes1. Whether you are young or old, everyone can benefit from this antioxidant.

When this happens, the free radicals in your eye can cause eye proteins to clump. For those who haven’t read our posts on cataracts, cataracts are formed by a protein build up on the lens causing cloudiness and loss of vision. This can lead to numerous complications, including damage to the photoreceptor cells in the retina.

Alpha-lipoic acid fights the oxidation and free radicals in the eye to prevent that protein build up and cell damage. With no free radicals, your eyesight will be healthy and will stay clear in the long run.

Eyes, unlike other body parts, are a hard thing to prevent from aging, but with a good dose of alpha-lipoic acid,  you’ll be on the right track towards preserving your healthy eyesight for life.

Where Is It Found?

As we mentioned before, alpha-lipoic acid is produced naturally by the body. Therefore, it can be most commonly found in the human body already. But sometimes, your body doesn’t produce the amount of alpha-lipoic acid required to fight the free radicals.

The same can be applied to those who overexpose their eyes to the sun. The overexposure happens quickly and before the body can account for what’s happening, the free radicals have begun to form.

When the body is low on alpha-lipoic acid, there is truly only one thing you can do: get it into your system. Our bodies have their plates full with a million other things to manage, so we can all lend a hand and give our bodies a well needed health boost.

One way to do this is by ingesting a supplement like the Rebuild Your Vision Ocu-Plus Formula. It’s easy, quick, and all natural. A lot of people will choose this option, especially those with busy jobs.

For those who like to cook, you can work alpha-lipoic acid enriched foods into your diet, for healthy eyes and a healthy body.

Alpha-lipoic acid can be found in a large variety of plants and animal-based foods. However, it should be noted that most foods only contain a low amount of alpha-lipoic acid. If your body is unusually low on this antioxidant, you may want to consider combining a supplement with the following foods.

Here are our picks for top foods containing alpha-lipoic acid: 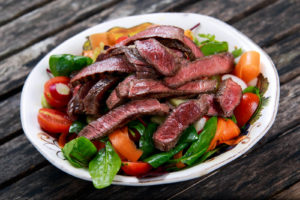 What a delicious list! There’s something on there for everyone, so there are no excuses as to why you shouldn’t be eating to enrich your eye health. If you aren’t convinced yet, a lot of these foods help your eyes in different ways. For example, spinach is very high in vitamin A. Think of it as a two for one!

Alpha-lipoic acid is essential to everyone’s eye health, which is why we insist on including it in our Ocu-Plus Formula. It’ll help the body fight free radicals, which in time will prevent cataracts, AMD, and severe cell damage.