Home > Vision Conditions and Diseases > Why Does My Vision Get Worse at Night?

It’s a well-known fact that humans are not built with night vision. Unlike nocturnal animals, whose eyes easily adjust to the darkness at night, humans just don’t have that ability. However, healthy human eyes should still be able to somewhat function at night. If you need a nightlight to find your way to the kitchen for a midnight snack, or have difficulty seeing while driving in the evening, you may be suffering from a condition known as night blindness.

People with night blindness see poorly in darkness or dim light but normally when adequate amounts of light are present. The condition is not the nighttime equivalent of true blindness; nonetheless, those who have it know how limiting its effects can be.

Why Is My Vision Worse at Night? 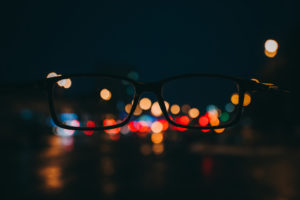 It is estimated that most individuals take about 20 minutes to adequately adjust their eyes to see in the dark. This time allows your eyes to adjust from the brightness of daylight or indoor lights to the darkness outside. As the light dims, your pupils dilate (grow larger) to take in more light.

However, a dilated pupil reduces your ability to change your focus between near and far objects, so that, for instance, while driving you may be “blinded” by streetlights and oncoming headlights. Just as it takes a while for your eyes to adjust when you enter a dark room, it also takes time for your eyes to adjust when a headlight appears. If you focus on the headlights, your pupils will constrict to block out the light.

This is why oncoming traffic can be such an annoyance when you are driving at night. Once the headlights have passed, your eyes will need time to readjust to the dark, making it difficult to see the road. In heavy traffic, your pupils may never adjust, as your gaze must constantly alternate between light and dark. Many people try to avoid this by attempting to look slightly away from oncoming headlights. This may help for a short time, but in the end you may have to limit driving at night to prevent an accident, especially if you have night blindness.

Eye of the Tiger

So why are some animals so good at seeing at night? Human beings are not like tigers, or house cats for that matter, whose eyes are superbly well adapted to seeing in the dark. One reason is that cats have more rods than cones in their retinas, unlike humans, making kitty night and motion vision superior. (Rods are the receptors that the eye uses for nighttime viewing and sudden movement. Cones are used during the daytime and process color information.)

Additionally, our day to day human lives may be making our night vision worse. Focusing up close is not natural to your eyes. As the human eye was not developed to spend all day focusing on computers, books, television, etc., doing so causes near-point stress. It also contributes to more long-term issues like Digital Eye Strain. This can contribute to the weakening of your vision.

Similarly, human vision is naturally poorer at night, when our hunter-gatherer ancestors were, presumably, sleeping (and perhaps guarding against tiger attacks). This is why the military developed night-vision goggles and scopes for soldiers. That said, if you are having greater difficulty seeing in the dark than your friends or family, you are most likely experiencing night blindness.

One of the most common causes of night blindness is ocular deterioration due to age. In the natural aging process, the eye lens becomes less clear and grows cloudy over time, making it difficult to see in dim light.

In some cases, night blindness is a symptom of a serious underlying condition, such as retinitis pigmentosa, which is inherited. This degenerative retinal disorder causes the retina’s rod cells to deteriorate and eventually stop functioning. Night blindness is often the first symptom of a cataract as well. Early cataract development increases glare and decreases the amount of light reaching the back of the eye.

A Feast for the Eyes

Night blindness may also be caused by a vitamin A deficiency. Supplements are often recommended for those with poor night vision, along with a diet emphasizing vitamin A-rich foods, such as sweet potatoes, carrots, mangoes, spinach, and cantaloupe.

Bilberry is also thought to improve night vision. A close relative of the blueberry, bilberry is high in a certain type of bioflavonoid. It speeds the regeneration of rhodopsin, the purple pigment used by the eyes’ rods. British air force pilots in World War II ate bilberry jam to improve their night vision during evening sorties.

If you think you’re suffering from night blindness, you’re not alone. Here are some tips to make it easier to see at night.

Don’t take chances with your life or the lives of those you love by continuing to drive if your night vision is getting worse.

While changes in diet may help some people suffering from night blindness, it is always best to talk to a medical professional before adding a vitamin or supplement to your daily routine. If your night blindness has developed as you age, eye vitamins may help to restore some of the flexibility to your vision. In either case you should speak with your eye doctor or medical professional first.