Whether you’re an experienced parent or doing it for the first time, there’s one thing everyone can agree on. Kids can be picky eaters, which in turn can be a real pain in the butt for those feeding them. We all know that kids can’t be put in charge of their own eating habits. Your kid’s diet would never be balanced enough if they had total control.

I mean, put a carrot and a chocolate bar in front of them and which do you think they’ll pick? Although to be fair, I know a few adults would go for the chocolate too.

But that’s beside the point. The point is that children need a balanced diet to grow up to be healthy and strong. As their caregivers, it is our duty to make sure that children grow up around happy and healthy eating habits that they’ll take into the rest of their lives. And that includes eating for healthy vision!

Creating a balanced diet for your children won’t just benefit their overall health and development, but it will also keep their eyes healthy. It’s no secret that a good diet will improve your eyesight and keep it strong for a lifetime. If you don’t believe us, just have a look at our essential vitamins and nutrients series!

However, eating healthy is especially important for children, as their eyes are constantly developing until the age of 18. Without a balanced diet, kids run the risk of developing deficiencies. Because children are less in tune with their bodies, it can be more difficult to tell if they have a deficiency unless they visit a doctor.

While deficiencies are rare, especially in the US, where a variety of food can be found in any grocery store, they do happen.

A few years ago, it was reported that 14-year-old Cian Moore from Perth, Australia had developed a severe vitamin A deficiency due to his eating habits. According to his mother, he had been living off of a diet of chicken, bread, potatoes, and coke since he was about five years old.

After panicking that no doctor could tell her what was wrong with her son, she flew them both to Sydney to meet with Professor Stephanie Watson, chair of the Royal Australian and New Zealand College of Ophthalmologists. There, Professor Watson accurately diagnosed Moore with a vitamin A deficiency.

Almost a decade of mostly carbohydrates left this poor boy with vision impairments, some of which he will never recover from. Though his eyesight has improved since eating a balanced diet, his left eye has been permanently damaged from this vitamin A deficiency.

Luckily, this is an extreme case. However, it is still important to recognize malnourishment. When we think of someone being “malnourished” we often have the image of a boney, hollow-cheeked person. But being malnourished doesn’t always mean being underfed.

For example, Moore looked like a healthy child. He wasn’t overweight or underweight. But looks can be deceiving. Eating mostly carbohydrates and fat will give you a sense of fullness, but you won’t be getting any of the nutrients required by your body to function properly.

The good news is that this type of blindness, as stated, is completely preventable. There is no reason for any child to suffer from a vitamin A deficiency and to lose their vision because of it. All it takes is a few little tweaks in their diets to significantly improve their vision health.

Eating a Balanced Diet: What to Eat 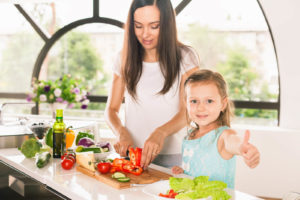 Eating a balanced diet that is also rich in vitamin A is actually pretty easy when you think about it. Mix in some veggies and fruit into your child’s lunchbox and you’re basically golden. It really doesn’t take much to ward off a vitamin A deficiency.

The trouble arises when your child throws their carrots on the floor in a fit because they don’t like the taste or would rather eat another piece of cheese instead. When you have a finicky eater, meals can be harder to balance.

The best thing to do here is to trick your kids into eating their veggies and fruit if they won’t do it on their own. There are several ways you can sneak in an extra serving of produce into their favorite meals!

Dress up veggies with healthy dips. The ranch is a classic choice, but can also be very fattening (unless you go for a light ranch dip). Alternatives include hummus or a yogurt-based dip. Or, try making your own! Cooking with your child might even inspire them to want to make their own healthy snacks and meals.

Purees are also a great way to trick your kids into eating their veggies. I’m not talking about baby purees here. Try blending carrots into a smooth puree and serving it with a nice sandwich. A carrot puree is basically colorful mashed potatoes, right? Sort of, but that’s what you’ll tell your kids.

Fruit is an easy food to get kids to eat. Because fruit is so sweet, you’ll probably have an easier time getting your kids to eat them. But in case they’re still not going for it, try letting them eat it with a little bit of chocolate spread or English cream. But only a little!

Your children need you to be their guide when it comes to healthy eating. Lead by example and you’ll be reaping the health benefits just as much as your kids will!