Home > Food For Your Eyes > The Starchy Food Debate: Is It Bad for Eyesight?

We talk a lot about nutrition here at Rebuild Your Vision. This discussion mostly centers around foods that we know are good for the eyes. Take leafy greens, for instance. They are known for being vision powerhouses because they contain specialized pigments that can reduce the amount of stress aging eyes experience. This lowers your chances for a few serious vision disorders. But how does starchy food affect your eyesight?

In this article, we’ll deviate from the norm by talking about a food that might be best avoided for the sake of visual health. Diet, of course, is one of the three biggest risks to your eye health. We’re talking about starch:  a component of dietary anchors such as rice, potatoes, and wheat.

While there’s still plenty of debate on the subject, some research has shown that starchy foods may pose some unique dangers to the eyes. We’ll discuss the science behind this research and then give you a quick summary of the evidence for and against starch.

Starch itself is a complex sugar. This means that it’s a network of connected glucose molecules that, in practice, looks like a rather dull white powder. It’s commonly produced by vegetables, which use it as an energy storage unit. Plants create it during the day, using sunlight to power the process, and then consume it as fuel during the night. 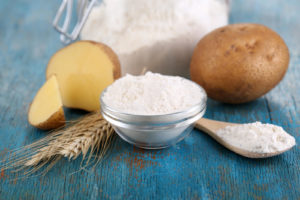 As you might guess from the above description, starch is absolutely energy-packed. For humans, it’s an incredibly dense source of sugars, making it a valuable means of filling out a diet. More recently, it’s also seen use as an industrial base for the manufacture of sugars. This is because starch can be converted to glucose and a variety of similar chemical structures that produce different sugars.

Foods that contain starch are relatively abundant. Many cultural diets rely on starchy foods to provide a staple source of energy. As mentioned above, potatoes and rice are both extremely starchy foods. But as useful and delicious as starchy foods are, they play an increasingly uncertain role in modern diets.

As giant collections of sugar molecules, starches lie extremely high on the glycemic index (GI), a measurement of the extent to which a food increases blood sugar after consumption. It’s a useful tool for determining how the body deals with different carbohydrates. A high GI score generally means that the carbohydrate in question quickly breaks down into glucose, which then enters the blood; a low GI score indicates the opposite.

Starches lie on the high end of the scale. Ingest a starch and it will rapidly translate to an increase in blood sugar. This isn’t surprising given that they’re basically superstructures built from glucose. And what happens when your blood sugar increases from starch? Your energy levels may rise, for a bit. This is why runners often consume pasta before a big race.

That spike can pose some problems, however. Diabetics in particular can have difficulty controlling blood sugar levels after a starch-heavy meal. While non-diabetics don’t have to face those particular challenges, there’s some evidence that high-starch diets can still deal damage to the eyes, giving just about everyone some incentive to watch their intake.

Age-related macular degeneration (AMD) is a widespread threat to aging eyes. AMD occurs in two ways. The first is when waxy deposits form on the back of the eye. The second is when tiny capillaries in the eye rupture and begin to grow abnormally, stressing and eventually scarring the retina.

A leading cause of blindness, AMD progresses very slowly and often imperceptibly. By the time sufferers notice changes, they will have often lost a significant amount of center-field visual acuity. While the exact causes of AMD are still being researched, the Macular Society has linked high starch intake to an increased risk of developing the condition.

High GI diets generally included foods high in starch, such as white rice and refined flour. While the connection between these foods and AMD hasn’t been tested in humans yet, eating a lower glycemic diet is a good idea if you want to prevent the onset of AMD.

First, understand that the correlation between high-starch diets and AMD hasn’t reached a slam-dunk point. Scientists need to conduct more research to fully understand how one affects the other. However, there are plenty of more no-nonsense reasons to ditch starch anyhow.

A diet extremely heavy in starchy foods contributes to obesity and, by the same token, to the odds of contracting type II diabetes. Both of these conditions can prove dangerous to the eyes. This is because both conditions cause extreme stress on blood vessels in the eye, just like AMD. Not only that, but starches crowd out much more eye-healthy foods from your diet.

Counteracting some of starch’s effects by exercising both your body and your eyes may be helpful as well. Research shows that physical activity can strengthen your eyesight. Additionally, try adding some eye exercises that will strengthen your vision naturally. If you add these to your routine, you may be able to counteract the effects of starchy food on your eyesight.

To start de-starching your diet a little bit, don’t immediately conclude that you need to cut out rice and bread. You can still eat them, just aim for unrefined versions. Brown rice and whole-wheat bread are both further down the GI than their processed cousins, thanks to the additional nutrients they contain. Switching over to these friendlier foods means that you can still eat what you like, but also avoid some of the stresses that starchy food can cause your eyesight.