Everyone’s got their funny little habits. They range from quirky to cute to well, sort of gross (nail biters, unite), but they’re all generally pretty harmless. However, as we always seem to say, even the little things can have big impacts on your sensitive eyes. Here are a couple of the everyday bad habits many of us have developed that may be affecting our eyes.

No one ever drops a habit overnight, but if you catch yourself consistently doing anything on this list, then it’s probably time to start thinking about making some changes. 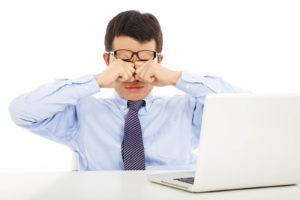 We all do it. Eye rubbing is a perfectly natural behavior, and generally not an awful one. Rubbing encourages the eye to produce tears, making it a natural response to dry, itchy eyes caused by allergies or sleeplessness. Not only that, but it also presses down on an important facial nerve – the sensory trigeminal nerve – which in turn, communicates with the vagus nerve, and that’s where things get interesting.

Stimulating the vagus nerve actually helps reduce heart rate and blood pressure – a phenomenon called the oculocardiac reflex. The changes induced by this reflex can help a person relax during tense situations and effects can be pretty dramatic. Ever seen someone step away from a heated argument to rub their fists in their eyes? They’re unconsciously taking advantage of the oculocardiac reflex. Rubbing also helps relax the muscles around the eyes, which can be strained by long periods of visual concentration.

So, wait… all that sounds pretty great! What’s wrong with eye rubbing? If done in moderation, the answer is probably “not much,” but it changes quickly the more you rub. Excessive rubbing can rupture blood vessels in and around your eyelid, giving you the “caffeinated panda” look sported by students and other late-night workers. Your hands are also less-than-clean and rubbing too much puts you at greater risk of transferring germs from your hands to your eyes.

Finally, and perhaps most worryingly, rubbing can physically damage the cornea. It can thin the cornea out and cause it to distend forward, resulting in a condition known as keratoconus, which can require surgery to treat.

What You Can Do to Stop Eye Rubbing

If you’re becoming increasingly worried about your own eye rubbing after reading all that, there are a few ways to trim the habit back. An awful lot of rubbing comes as a response to dry or strained eyes, and guess what we all do that dries out and strains our eyes? Hate to say it, but you’re doing it now.

Staring at a laptop or tablet screen for too long results in what some physicians call Computer Vision Syndrome. The combination of an unblinking gaze and the close proximity of most screens to your face gives you those scratchy, tired eyes, and encourages more rubbing.

Fortunately, there are some things to do to combat it. First, sit a bit farther away from your computer screen. Eye care experts recommend arm’s length or more. Second, try to take breaks. Grab a few seconds every so often to stand up, walk around, and focus on something other than the screen.

Catching a Bit Too Much Light

“Don’t stare at the sun” is parental advice as old as “don’t go swimming after eating.” And, believe it or not, they’re both fairly sound nuggets of advice. We won’t go into the precise mechanisms of munching and swimming, but we do need to talk about your eyes and UVB damage. This is one of biggest bad habits that affects eyes and vision.

An awful lot of the study into the exact effects of ultraviolet radiation came about several years ago amidst panic about a depleting ozone. And while the good news is that there has been some reversal to this trend, we still need to protect ourselves. By far the most common sun-related injury to the eyes is photokeratitis, a condition similar to sunburn that affects the eyes. Symptoms include the usual sunburn suspects: discomfort, redness, tearing and, a sensation similar to having sand in the eyes.” Lovely.

However, it’s not the only thing that can happen after an overzealous day at the beach, and it’s actually far from the worst. UV radiation has a well-documented tie to cancer. Those harmful rays can easily damage tissue if you overexpose yourself to them. And while you’ve probably heard about the importance of sunscreen a million times or more, it’s important to remember that your eyes are equally at risk. Carcinomas and melanomas can both develop if you let your eyes cook for too long. And believe it or not, your orbs won’t even get much of a tan.

A host of other chronic conditions, notably cataracts, can also be exacerbated by too much time in the sun. Pingueculas, pterygium, and similar problems are among the nastiest-looking things that can occur. They’re small, but very visible deposits that form on and around the eyes as a response to UVB damage. If you didn’t wear sunglasses before getting them, you’ll likely want to start afterward.

What You Can Do to Protect Your Eyes from Sun Damage

Thankfully, there’s a pretty easy solution here: wear your shades. Specifically, your polarized sunglasses, which help filter out harmful forms of radiation. Even cloudless days can have plenty of light filtering down through the gloom. So, if you’re planning to be outside for a long period of time, haul along your favorite pair of shades. This is one of the easiest bad habits to break, as simply wearing good sunglasses will do wonders for your eyes.

At the end of the day, try as we might to prevent it, our eyes will still take some hits. It’s pretty difficult to stop all the bad habits that may affect our eyes. Short of wearing one of those Elizabethan doggy collars, we can’t really keep from rubbing our eyes every so often – reflexes are reflexes after all. And the sun? Sort of hard to avoid as we can’t really sanction never going outdoors.

You’ll be doing yourself and your eyes a big favor if you follow the above advice. But that’s just the tip of the iceberg. Instituting a regular regimen of proper nutrition specifically tailored for your eyes can help compensate for the environmental damage they are susceptible to. Our Ocu-Plus Formula might not be able to block out UV radiation (though a sweet pair of aviators might), but it can help ensure your eyes are in the best shape they possibly can be all day, every day. These are the first steps to take in your efforts to prevent bad habits for your eyes.